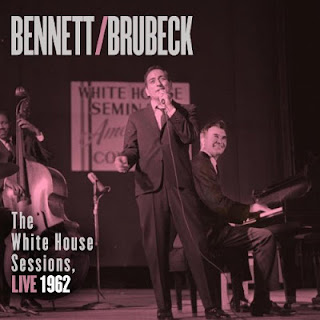 Imagine finding a rare tape of Mick Jagger sitting in with The Beatles in 1964.  It didn't happen, but a jazz equivalent might be the time Tony Bennett and Dave Brubeck took the stage together in a one-off showcase, in 1962.  Long missing, the tapes were just rediscovered in the Sony archives, misfiled under classical.  Well, it is a classic, so maybe they were right.
The event was a special Washington show, not at the White House itself, but at the Washington Monument, for college students working at the Capitol that summer.  As for the career timing, it was pretty much perfect.  Bennett had just released a little number called I Left My Heart In San Francisco, which would become his most-beloved number.  Brubeck was the reigning champ, his Take Five album the top-selling jazz album ever, the first to sell a million.  And the billing was a one-off event, the two never sharing the stage.
Brubeck's Quartet took the stage first.  With a short set ahead, they dispense with Take Five off the top, sped up and hip, almost showing off what they can do.  Brubeck takes care to credit the song's composer, sax man Paul Desmond taking a bow.  Then he politely explains what the band is all about, taking sounds, styles and time signatures from different cultures, and showing how they can fit into the jazz idiom.  A sort of World Music of jazz, decades before the term came into use.  Three long pieces follow, tighter than yoga pants.  Brubeck, always the king of cool, still let fly a nasty solo or two, reminding you that he could bring it as well as anyone.


Bennett and his trio were next, including his lifetime accompanist, Ralph Sharon at the piano.  Smooth and confident, Bennett walked the line between the popular song and jazz chops with ease, erring perhaps on the side of entertainment, but still being such a talent that the jazzheads really had no reason to hold their noses.


The highlight happens at the end, as Bennett brings back Brubeck, along with Eugene Wright on bass and Joe Morello on drums.  It's a once-in-a-lifetime summit, and unrehearsed, the star pair figuring they might as well do it, and must have a few in common.  So standards it is, starting with Lullaby Of Broadway.  Bennett immediately has fun, handing it off to Brubeck for a solo by singing, "..a lullaby of ...Dave Brubeck!", giving him the spotlight.  Bennett gets plenty of time to stretch though, a little scat even, clearly rising to the occasion of having a star up there.  He goes for it on Chicago, hitting a full-volume end, the musicians clearly enjoying the moment.  It's just four songs, an encore to the 70-minute performance, but thank goodness it's been saved.  Such are the great moments.
Posted by Bob Mersereau at 5:35 PM