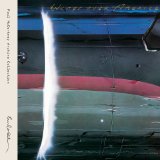 The latest in the ongoing reissue series of McCartney discs, which for some reason isn't following a chronological order.  This latest is the triple vinyl album that came from the famous Wings Over America tour of 1976, which saw McCartney conquer that country (and Toronto) with the biggest tour of the year.  Even though Wings had begun as a little band he could hit the road with, just playing rock and roll tunes to small college audiences, by then he'd seen Band On The Run, Venus & Mars and At The Speed Of Sound become huge hit albums, and this band was the biggest thing since, well, that other band he'd been in.

I've always thought this set was a really decent deal.  It's the whole show, start to finish, that he was doing that year, nothing left out, the same order, everything, so a real souvenir for all of us far away from the venues he played.  I'm that kind of fan.  Now, it wasn't all from one show of course, and there was the usual doctoring back in the studio, most notably certain band members had to redo their vocals.  But it still sounds like a complete show for the most part, a full concert experience over two hours.  Notable for the inclusion of five Beatle tracks, ones associated with Paul of course, I remember the excitement that caused at the time, when we thought we'd never hear those treasures sung again.  While it isn't quite the thrill anymore, it is still nifty to hear Yesterday, Blackbird, even The Long And Winding Road, by the composer.

And don't forget Wings was still considered a band, not a McCartney vehicle.  Denny Laine and Jimmy McCulloch get the spotlight too, with lead vocals and solos, and McCartney gets to switch off to piano and acoustic guitar, thanks to their presence.  And there's Linda of course, wisely mostly in the background.  There's plenty of criticism I could throw at them of course, chiefly how McCartney's lyrical ability had diminished by this point.  You don't really want to analyze these songs too much, everything from content to grammar could be atrocious (the infamous "In this ever-changing world in which we live in" from Live And Let Die).  He was writing cartoons instead of serious lyrics, quite literally in the case of Magneto And Titanium Man.   But they all sounded great.  Jet, Let Me Roll It, Letting Go, Beware My Love, these songs rock, especially live.  Silly Love  Songs, not so much.  Too bouncy, it makes it a trifle.  But compared to most live recordings, especially the last twenty years, this feels like an event, and is fun to hear.  They just knew how to do it better then; Frampton Comes Alive, Elton John 11-17-70, Allman Brothers At The Fillmore East, no matter who your favourites were, the live albums seemed more special then.

As usual, there are choices to the package you can buy for the reissue.  The bare-bones CD is available, just the two discs, remastered.  Or the vinyl has been reissued and upgraded.  For those willing to throw big money, there's the Super Deluxe box, which has a third CD of bonus tracks, a DVD, and a couple of big books to gaze at.  I haven't seen the full package, nor have I heard the extra audio, but I'm not too excited by it.  The bonus tracks are a handful of the same songs from a different venue, so it won't be anything too different.  I have seen the DVD, and that's not much at all.  There's a 75-minute TV special on the tour, which is really quite dull, aside from the song fragments and a shot of Ringo backstage, and the rest being the standard documentary stuff of bands going back and forth in the bus and such.  Beware, my love.
Posted by Bob Mersereau at 10:29 PM