MUSIC REVIEW OF THE DAY: SING ME THE SONGS - CELEBRATING THE WORKS OF KATE MCGARRIGLE 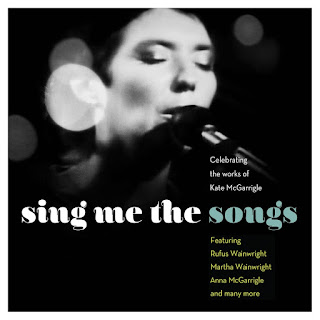 Kate McGarrigle was so loved by her family, friends, and musical community, one tribute concert wouldn't do it.  This double-disc collection comes from three different shows spread out from 2010 - 2012, in London, New York and Toronto.  They served as fundraiser, and so does this disc, with net proceeds going to the Kate McGarrigle Foundation, which supports cancer care and research.

The cast of these tributes changed only a little; mostly it was the McGarrigle's band, and the kids and cousins and Anna of course.  Norah Jones was on hand in New York, Linda and Richard Thompson contribute a song, their son Teddy was deeply involved, Antony guests, and of course, Kate and Anna's great friend, Emmylou Harris.  She takes a major role, joining in group vocals on several songs, as well as performing her incredibly touching Darlin' Kate, which describes her final moments, and the feelings of those closest to her.  Jones' version of (Talk To Me Of) Mendocino is heartfelt and beautiful, and even joker Jimmy Fallon provides a fun and more than passable job on The Swimming Song.

But these nights belonged to the children.  Rufus and Martha Wainwright feature on the bulk of the songs here, and its quite amazing to hear their mother's words from them, and realize how personal and powerful they are.  Her tales were almost always biographical, specific times in her life, some joyous, some sad.  Rufus singing I Eat Dinner, a song that speaks of her loneliness, is heartbreaking, and Martha gets to tell the story in Matapedia, in which she figures as a teenager.

What a legacy Kate has left them, and us.
Posted by Bob Mersereau at 7:10 PM