MUSIC REVIEW OF THE DAY: JOHN FOGERTY - WROTE A SONG FOR EVERYONE 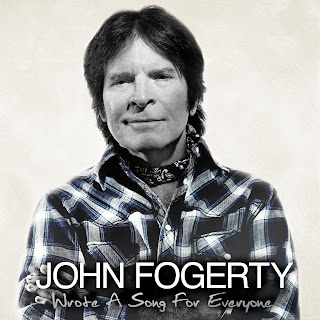 I'm certainly burned out on the duets concept album, where one performer teams up with a dozen or so celebrities to sift through their back catalogue.  But it's practically one of the only sure-fire ways to shift some units for the veterans.  Fogerty's albums have been okay over the last few years, but I don't know anyone who owns one.  However, the CCR hits albums still sell a bundle, so there's still a consumer appetite out there.  So, he did what he had to do, I guess.


It's a weird crew he's signed up for this.  There's no shortage of A-listers who would have come on board no doubt, but instead Fogerty has largely gone to Nashville names.  Again, perhaps sales had something to do with that, as Nashville sounds more like him than most other genres, and those folks still sell albums.  So its Alan Jackson, Keith Urban, Brad Paisley, and Miranda Lambert, alongside a mixed bag that includes Foo Fighters, My Morning Jacket, and Dawes.


The results are mixed as well.  The Foos sound great ripping into Fortunate Son, a take-no-prisoners version.  Lodi is done with Fogerty's two sons, more up-tempo and choogling, with a good groove and lots of guitar from them.  Bad Moon Rising becomes a boogie-country number with the Zac Brown Band.  Mystic Highway, one of two new numbers premiered here, has his classic sound, and is a stand-out.


On the down side, the other new one, Train Of Fools, is plodding and cliche-filled.   Wrote A Song For Everyone is a good duet with Lambert, but it also has a ridiculous and inappropriate guitar solo from Tom Morello.  Almost Saturday Night becomes a mess, with a banjo opening, horrid backing vocals, and, well, Keith Urban.  Who'll Stop The Rain sounds good, except Bob Seger sounds weird, he's singing like Kenny Rogers looks.  And then there's Proud Mary, a bizarre production.  Kudos for the idea of doing it in the Ike & Tina arrangement, with the slow opening, Jennifer Hudson in the Tina role, but then it becomes a Cajun thing, with Allan Toussaint and Rebirth Brass Band in tow.  The end result is a clumsy mash-up.

And so it goes.  One I like, the next I don't.  It neither sullies the legacy, nor improves it.  I'd like to hear more new songs the caliber of Mystic Highway though.
Posted by Bob Mersereau at 8:56 PM