MUSIC REVIEW OF THE DAY: BEN SURES - SON OF TROUBLE 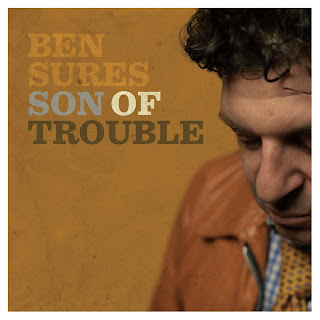 Sures is a blues man with a difference here, a refreshing change of pace.  His short, witty songs certainly don't sound like the standards.  Love Will Kick Your Ass is an obvious grinner, and on I Could Be Your Man, the usual blues bragging is replaced by up-to-date reasons:  "I'm like Darth Vader with a carburetor."  Even when he's playing it relatively straight, such as the longer Pamela Pamela, his guitar solo is suitably wacky.


Produced by the sublime Don Kerr (Ron Sexsmith), and accompanied by A-listers (Paul Reddick on harp and harmonies, Kerr on drums, Ken Whiteley on piano), this is relaxed and raw, but lively and pure pro.  Eat Drink And Make Babies keeps up the smiles, with the quick closing line "..and maybe when it's over take a nap" typical of the lyric surprises he likes to drop like little bombs.


Sures is usually found in the roots department, but this time he decided to visit the blues aisle for a full disc, bringing over his quirky writing.  He also has his ear to the rest of the world's blues roots, covering African and Spanish numbers as well, showcases for his strong guitar playing.  In his understated way, he's a master at these foreign styles as much as he is the North American versions.  Hearing his deconstruction of See That My Grave Is Kept Clean is worth the price alone.  He's someone who really knows how to breathe fresh life into a too-often staid genre.
Posted by Bob Mersereau at 1:55 PM