MUSIC REVIEW OF THE DAY: JIMMY WEBB - STILL WITHIN THE SOUND OF MY VOICE 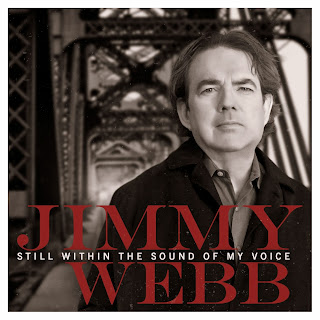 Webb's been writing songs for others since 1965, and has regularly recorded himself as well.  For some reason, while others have had huge, enduring hits, he has never broken through on his own, even though he's a household name.  Conventional wisdom is that he doesn't have the voice and personality to hit on his own, but he sounds just fine on this new collection.  He's joined by a mixed bag of stars, old and new, going through choices, famous and lesser-known, of his huge catalog.


He's done this before, as recently as 2010's Just Across The River, so the hits have largely been claimed already.  So no Galveston, Wichita Lineman, or By The Time I Get To Phoenix here.  That's okay though, because it forces him to find some other good ones that haven't been heard too much.  That includes Elvis And Me, one of the few songs about Presley that actually is interesting, and completely true.  In a classy move, Webb's guests here are The Jordanaires, The King's old backing vocal buddies.  Another lesser-known gem is Easy For You To Say, covered first by Linda Ronstadt on her 80's album Get Closer.  With her recently-announced illness, in steps Carly Simon for the duet duties, no slouch in that department.  But it's here that Webb really shows his voice has grown better with maturity, as he ably carries his end with a the famous pipes of Simon.


Newer guests include English star Rumer, whom Webb has championed in her short career, joining in on the title cut.  The left-field choice of guests has to be Justin Currie.  It turns out Webb is a fan of Currie's group Del Amitri, and simply wanted his voice here.  Most of the other folks are pretty obvious choices, friends from Webb's long career, including Art Garfunkel, Amy Grant, America, all of whom he's worked with in the past, plus Crosby & Nash, Marc Cohn, Keith Urban, Lyle Lovett and Joe Cocker.


Not all of Webb's big hits had been taken up by the Just Across The River project, and this proves to be unfortunate.  He attempts a remake of Honey Come Back, this time with Kris Kristofferson handling the spoken word part first done by Glen Campbell, and its just cornball.  It never was much of a song, anyway.  Worse though is the highly-contentious MacArthur Park.  It's always had many detractors, and despite a new arrangement and quite glorious backing vocals featuring Brian Wilson, it's still an overwrought lyric.  Donna Summer's disco take was better.  But the good ones outweigh the clunkers here, and once again Webb shows why he's one of the best songwriters of our time.  More surprisingly, he proves a better interpreter of the songs than he's been credited with in the past.
Posted by Bob Mersereau at 10:55 PM