MUSIC REVIEW OF THE DAY: THE SADIES - INTERNAL SOUNDS 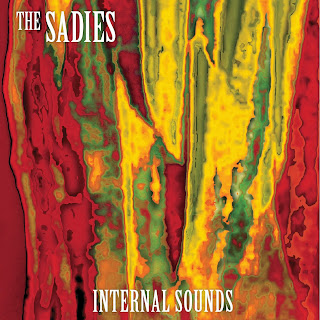 Another garage-psych-heavy twang disc from The Sadies, just the way we love 'em.  As well as some ferocious playing, the hallmark of a Sadies release, this one includes some of the best individual songs they've penned.  The Very Beginning is a heavy powerhouse, propelled by monster drums from Mike Biletsky, Dallas and Travis Good in close harmony, the tune itself one of their fine examples of updated Summer Of Love-era sounds.  Starting All Over Again goes through several tempos and sections, a journey of a song that circles back on itself, like the relationship described in the lyrics, "there's no way of telling the beginning from the end."  The Very Ending, one of the group's trademark instrumentals, closes off Side 1, with a taste of their epic Morricone/surf melange.  Another Tomorrow Again is The Byrds on speed, with some of the fiercest guitar licks they've ever done.

The disc is split into Side 1 and Side 2, like their beloved 60's albums, and it's short and sweet like them too, under 40 minutes.  You can't begrudge that, the band has already put out one album this year, all playing on the excellent Good Family disc, and has another due soon, collaborating with Gord Downie on his long-awaited next solo project.  But they are wise too, always leave 'em wanting more, and anything over 45 minutes inevitably leaves the listener restless.


There's a special track closing things out, as the group teams up with First Nations and Canadian hero Buffy Sainte-Marie, for a song called We Are Circling.  It's a unique piece that was started by the group, who then asked Sainte-Marie to join in.  Being mutual fans, she played mouth bow on the droning track, and then brought in some older words from the 70's, coming up with this new version.  It continues the circular theme, and although you'll barely recognize The Sadies in it, is such an uplifting number, it's wonderful it has found a home here.
Posted by Bob Mersereau at 2:19 PM