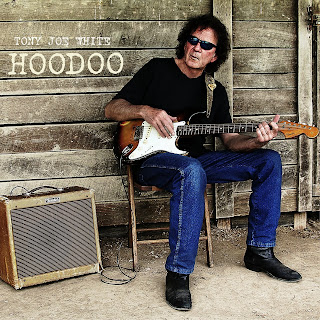 Tony Joe White does what TJW has always done; a swampy take on one-chord John Lee Hooker blues, albeit fleshed out with bass, drums and lots of fuzzy guitar licks.  It's all done at one slow tempo, seemingly leisurely, but tight as a knot.  There's danger in every song, not that you can make out what from his mumble.  But that's the blues, isn't it?  He tells us his baby's got a sweet tooth in one verse, and the next she's got a mean streak.  That's dangerous sugar.


Simplicity is the key here, not the sameness in each track.  What you're looking for is the subtle differences; where the bass steps up a tone during the brief instrumental break, and quickly slips back down to the usual key.  The way the guitar licks answer the vocals, different in each song.  How the basic drumming differs from cut to cut.  In the words of Neil Young, it's all one song, but White and co. show there's lots of ways to play it.


The album's filled with Southern tales, of floods and alligators and gypsies.  You know there's nastiness and cheating and such, but it's not overly dramatic, it's just life.  Sometimes bad things happen.  They usually make a good song.  White's not the best vocalist for his efforts, always hard to make out, which explains why others (Brook Benton, Rainy Night In Georgia, Tina Turner with Steamy Windows) have had bigger success, but nobody else will get the sound quite right.
Posted by Bob Mersereau at 2:51 PM