MUSIC REVIEW OF THE DAY: CALE SAMPSON - THE BIG PICTURE 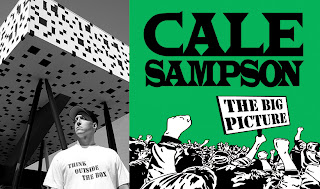 Cale Sampson has more to say in one tune than most writers do in a career.  The Toronto rapper takes on everything from world banking to hunger to the wage gap to corporate deception, tracing economic political control over centuries, and that's just in the first track, Reach Up.  Sampson calls his stuff info-rap, and he's sure laying it down here, attacking the twin towers of government and banks in several numbers, getting pretty deep into complex economic theory.  That's his bag, he wants to make a difference and use his microphone to educate and rally the troops.  In other words, he ain't rhymin' about ho's and pimps.

There probably isn't another forum where you could rhyme about "Goldman-Sachs sold sub-prime mortages they knew were bad/they also profited by betting they'd all fail, so they'd win any way/and no one went to jail."  The trick is to make it entertaining, and despite his getting into the 50-trillion dollar U.S. debt, the C.I.A. and money-laundering and flouride and Monsanto, it's a hell of a lot more interesting than 99 per cent of most MC's output.  Throw in media monopolies controlling mass communication, and it starts to feel a bit like Conspiracy Theory 101, but as Sampson says himself, "If you think I'm wrong, go ahead try to stump me/let's see you write a song smart as this to debunk me."

Whether you agree with anything he says or not, the point is, it's good fodder for songs, and a whole lot better than most lyrics from any genre.  About the only thing Sampson has in common with other hip-hop writers is the bragging; on Nothing To Prove, he lays down his manifesto, tells us he's smarter than the average bear, and explains how he's getting successful without selling out, no record company, no manager, just himself:  "It's time for you to think outside of the box/the music I make's not your typical hip-hop/I can do the punchline thing, but it's easy for me/It's boring, I'd rather say something that's important/There's a difference between me and other rappers/all you have to do is listen to the subject matter/Ain't nobody else trying to enlighten your minds/putting their life on the line with what they're writing in rhymes."  While most of the set is devoted to the big picture topics, he breaks things up with, of all things, a love song, and a good one, Jamie's Song, about how is life is better with his partner.

Sampson's launching his disc this coming Saturday, Sept. 14 for you folks in the Toronto area.  The release party is being held at The Winchester Kitchen and Bar.
Posted by Bob Mersereau at 8:58 PM