MUSIC REVIEW OF THE DAY: VARIOUS - THE SOUTH SIDE OF SOUL STREET 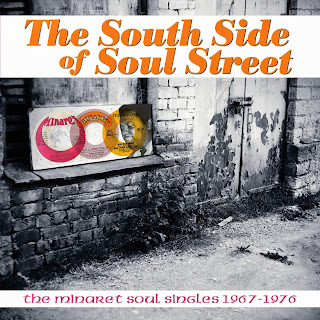 There's nothing I like better than checking out old singles from the past, gems from the 60's or early 70's when the name of the game was duking it out to make the best hits.  The competition was fierce; to get played on the radio or stocked in juke boxes, you had to rock like the newest Beatles or Stones, make 'em dance like all those Motown greats, or create sonic symphonies like Phil Spector or The Beach Boys.  For every Top 40 hit, there were dozens of failures, but often not for quality reasons, they just couldn't get heard by enough people to make them hits.

Across North America there were hundreds of little regional labels, who might have a local hit with an artist, but couldn't get wide enough distribution or radio play to make it onto the charts.  Flip through the lists, and you'll find Bobby Hamilton, George Hamilton IV, Roy Hamilton, and of course Hamilton, Joe Frank & Reynolds, but unfortunately Big John Hamilton never made the Top 100, let alone the Top 40.  That's because Big John recorded for the tiny Minaret label, based in Valparaiso, Florida.  He was a killer soul singer, with that deep south sound, the Stax and Muscle Shoals version, not the slicker Northern equivalent.  He recorded from 1967 to 1976, the life of Minaret, the biggest name in a stable of similar hitless artists.  Of course, that doesn't mean he wasn't good.


He was, in fact, quite a fine singer, and these productions cook with fine quality production, arrangement and performance.  Minaret was set up by a local entrepreneur, Finlay Duncan, a guy so universally liked that his nickname was Friendly.  Friendly got into the music game after owning juke boxes, and set up his own recording studio in Valparaiso.  Like other great Southern studios, that attracted local talent looking for work, including singers, writers, arrangers and musicians.  Soon he had a crack team hanging around, the studio was hopping, and a bunch of great records were made.  Too bad none of them ever got out of the South.


There are twenty Minaret singles collected here, both A and B-sides, spread over two discs, and a full half of them feature Hamilton.  Big John was an excellent singer in the Otis Redding style, which by '67 was huge across the South.  But Big John was no copyist, he brought his own take on things, a little more Gospel, a little less plaintive, and more partying.  Cuts such as Fine Time and Big Fanny were aimed at the dancers.  All his singles are worthy in fact, and the b-sides are no toss-offs either, as much quality went into them, which makes this collection even better.  There's a delicious country-soul version of Before The Next Teardrop Falls, far funkier than the version Freddie Fender had a hit with in the 70's.


Other artists came and went on Minaret, including Genie Brook, Leroy Lloyd and Johnny Dynamite.  Their singles all met the same fate, but thanks to the high standards at the label and studio, all are gems to be discovered by soul fans.  You don't have to stick with the same Stax hits over and over, go deeper into the South and find something that deserved a better fate.
Posted by Bob Mersereau at 1:34 PM