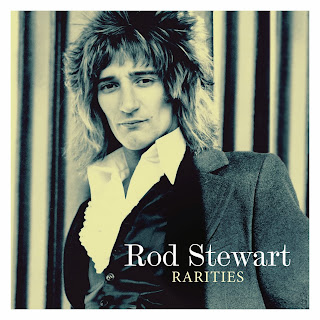 While there are only two previously-unreleased tracks here, this two-disc set does a good job of collecting all the harder-to-find Stewart tracks from his great early days in one place.  These are, for the most part, taken from the sessions for his first five solo albums, from The Rod Stewart album in '69 to Smiler in '74.  As every fan, and Rod himself knows, this is the best he ever did, especially the remarkable Every Picture Tells A Story album of '71.


That's the home to Maggie May, and we get two versions here.  The first is a previously-unreleased BBC radio recording, with a full (unidentified) band, in fine form doing a great live take.  The other is a working version of the track, before the lyrics were finished, with Stewart adlibbing some lines, something about "I don't wanna tell ya/but you kinda look like a fella."  This, and several of the other cuts were released on the The Rod Stewart Sessions box set in 2009, but nobody bought that.  At a much cheaper price you can now pick up early takes of Seems Like A Long Time, Lost Paraguayos, Italian Girls, I'd Rather Go Blind, and Stewart's grand take on Jimi Hendrix's Angel.  There's also a version of You Wear It Well, again with only partial lyrics, but that familiar band arrangement already in place.


There are some hard-to-find single tracks here, including his b-side country cover of Jerry Lee Lewis' What Made Milwaukee Famous, and the one-off Rod/Faces 45, Oh! No Not My Baby/Jodie, the latter a highlight cut.  The Smiler album turns out to be a goldmine of out-takes, including several tracks that didn't make the album.  While those showed up on a 2002 3-disc compilation of these years, again it's likely that isn't in your collection and this is a cheaper way to do it.

The other new cut here is again from the BBC vaults, a 1971 recording of Elton John's Country Comforts, done at such a slow tempo the band has a hard time holding back, but Stewart sounds great of course.  I'm a little disappointed there weren't more previously unreleased cuts included, but I'm one of the few that has those other collections, so this should be a pretty attractive number to fans of golden-era Rod.
Posted by Bob Mersereau at 11:28 AM