MUSIC REVIEW OF THE DAY: THE CLASH - HITS BACK 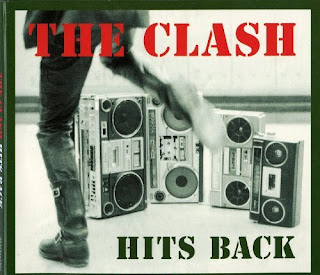 This is a fine double-disc best-of, but what I really want is the new Sound System box set, a gorgeous new 11 CD - 1 DVD collection, housed in a replica ghetto blaster and retailing for around $200.  It features all the original albums plus rare tracks, demos, live stuff and non-LP material.  Sweet.  Someday.

Meantime, this packed set comes at the same time to appeal to us financially impaired fans.  It's well-packed at 32 cuts, and an interesting collection.  It was assembled not in the usual manner, but instead comes from a Joe Strummer 1982 set list.  Strummer spent a lot of time coming up with the ideal selections, and as this collection proves, he was a better judge than most at appealing to fans and finding the core tracks that showed what the band was about.  It's certainly a more representative bunch of tracks than what can be found on The Essential two-disc set, the current hits package that's available, better cuts overall, and a better listening experience.

Instead of going chronologically through the band's career, the set-list inspired track listing bounces all over the place, up to that year's hit album Combat Rock.  And since the only other album issued was the abysmal Cut The Crap, this doesn't miss out on any potential inclusions.  The obvious ones are here, London Calling, Clampdown, Rock The Casbah, (White Man) In Hammersmith Palais, Train in Vain.  Since it was a live show, it's heavy on rockers, reggae and ska-influenced numbers (Wrong 'Em Boyo, Police & Thieves) and rampaging covers (I Fought The Law).  While I miss some of the softer moments, such as Lost In The Supermarket, The Clash were at their best with power, and that's what you get here.  A set list that made for a great concert now makes for an excellent driving mix.
Posted by Bob Mersereau at 1:40 PM