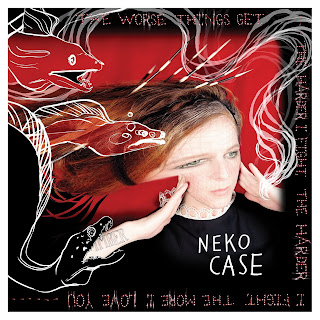 Welcome back, Neko, after four years, and according to her recent interviews, a bout of depression and tough times, including the death of her father.  What we get is a fascinating album, musically and lyrically adventurous, hard to describe, sometimes hard to fathom, but top-notch right through.  While there are still little bits of the alt-country she became known for, she's advanced into territories that defy easy categorization, and all the better for that.  There's are left-field rockers that recall the sounds of Los Lobos and Calexico (Steve Berlin, Joey Burns and John Convertino all appear, along with several other guests), great pop charmers (AC Newman, her pal from New Pornographers is here too), and stripped-down acoustic, quiet numbers as well.

Still, the star as always is Case's voice, one of the great set of pipes, tough and dramatic, edged with sadness.  She can sing it all, and always leads the song, no matter what's happening musically.  Her tender, soft vocal on the only cover here, Nico's Afraid (nice namesake choice there), is performed with such clarity and precise diction, it becomes a nursery rhyme, albeit a spooky kind of one.  And of course, the co-star is Kelly Hogan, her long-time harmonizer and backing weapon, especially on the rockers, where their one-two punch is irresistible.

All this vocal power is particularly effective with the rather odd set of lyrics here.  Many of the tracks are said to be autobiographical, but she's not giving too many hints.  Try to get your head around I'm From Nowhere's opening, "Goodnight, sunshine..The ghetto-bird shines 4 am, welcome to the West.  A mosquito to kiss your hands and feet, welcome to this dirty business."  I predict hours of fun trying to understand what's what, but the words sound great, are sung great, and nobody writes like her.  Here's some more: "My brain makes drugs that keep me slow/A hilarious joke for some dead pharaoh/But now, not even the Masons know what drug will keep night from coming."  I got nothing.  Yet.  No worries though, whatever tumult she's been through, there's much strength passed on here, in an album that's special from start to finish.
Posted by Bob Mersereau at 10:00 PM