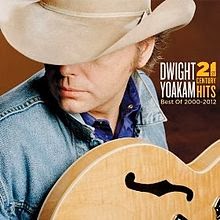 Yoakim's hit-making string stalled in the new millenium, but this collection attempts to show he still made magic.  It grabs cuts from the several albums released since 2000, a mixed bag at best.  While always being touted as a maverick, trumpeting "real" country over Nashville pop, Yoakam came to prove he's not above going slick either.  Or selling himself.  His version of Queen's Crazy Little Thing Called Love was originally a Gap commercial, so successful he released it as a single, a #1 in Canada and the last time he visited the Top 10 country singles charts.  There's a (previously unreleased) duet here with Michelle Branch, she of crossover fame with Carlos Santana.  And there's the obligatory team-up with Willie Nelson, the guy you phone when you're desperate for a hit.  Yoakam's no purist.

Elsewhere, he does stick true to his roots though.  There's an entire tribute album out there to Buck Owens, his mentor and muse, called Dwight Sings Buck, released in 2007, just after Owens passed.  That includes a couple of faithful renditions included on this package, reclaiming Act Naturally from Ringo, and also a thoroughly excellent reworking of Close Up The Honky Tonks, made a modern ballad.  So there you go, you can have it both ways, old and  new style country.  The main thing is to write or cover inspired songs.

He's only partially successful with that, at least weighing the 14 cuts here.  For some reason, the only track from the acclaimed 2010 album 3 Pairs included here is a muddy mess produced by Beck, A Heart Like Mine, a case of the wrong producer wrecking a good cut.  There are far better numbers on that disc.  The compilers do grab a couple of gems from the 2005 disc Blame The Vain, the title cut and Intentional Heartache, but those were (failed) singles, so they didn't have to think too hard.  I have all those Yoakam albums, and have pretty much enjoyed them all.  The problem here is a sloppy job choosing his best, which is odd, since Yoakam himself is one of the two people who picked them.
Posted by Bob Mersereau at 11:49 AM