MUSIC REVIEW OF THE DAY: SLY & THE FAMILY STONE - HIGHER! 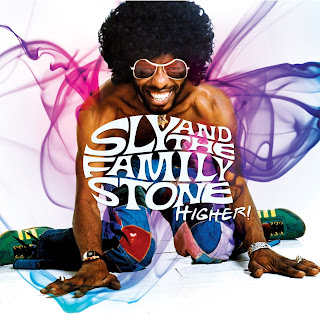 There's a sweet-looking four disc box set of the same name just out, but you can cheap out with this single-disc version to grab some hits and obscurities.  It's not a greatest hits, but it does include the big ones:  Family Affair, Dance To The Music, Hot Fun In The Summertime, Everyday People, Thank You (Falettinme Be Mice Elf Agin), several in original, glorious mono mixes.  Stand! is also included, in a strong live version, from 1970's Isle Of Wight concert.  So if you want it to fill the job of a best-of, it does pretty well.

The rest of the 16-track disc is an interesting cross-section, with some failed but strong 45's, unreleased out-takes, and even a wacky experiment, a thing called Small Fries which is Sly speeding up his vocals helium-style.  Mostly though, you get ground-breaking funk, soul and jazz in that incredible blend Stone put together, mixing races, genders and genres when any such combo was considered risky at best, and an affront in some States.   Brimming with ideas, every new release would bring in another milestone in the group's glory years, whether it was Larry Graham introducing his plucked-bass style on Thank You (and planting the seeds for disco) or Sly and the jazz underpinnings and heroic horns of Dance To The Music.  Pity it all went pear-shaped by the mid-70's, hopefully this will raise the band's profile because in my thinking, not enough credit or cachet goes their way.
Posted by Bob Mersereau at 10:32 PM