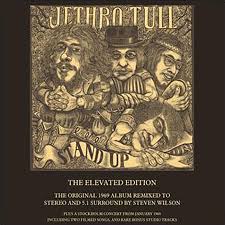 Pop quiz! Quick now, what kind of music does Jethro Tull play? If you said hard rock/metal, then you're a Grammy Awards voter, who infamously gave Tull that award over Metallica the first time it was a category. If you said prog, then you face the wrath of Ian Anderson, who still flinches when the P-word is thrown at him to describe early 70's albums Aqualung and Thick As A Brick. If you said folk-flavoured flute, that was the late 70's. If you said blues, then you're ... ah, old. You remember what Tull was at the start, the late 60's when blues was the thing in England, and everybody wanted to be Fleetwood Mac. When they were old, before the pop hits, and Stevie Nicks and ... oh, never mind. This is kind of a blues album.


Stand Up was the second LP for the group, from 1969, and already the group was changing from the successful debut, This Was of 1968. First off, their blues guitar player, Mick Abrahams, was gone, as Anderson wanted to broaden their sound. That first album had several instrumentals on it, and Anderson wanted to get into a broader sound, so in came the more malleable Martin Barre. While it wasn't a complete retreat from blues, it was a lot more diverse, it's most famous song the flute-jazz rave up on Bach, Bouree. Cuts such as We Used To Know were more hybrids, an electric blues track fused with Anderson's acoustic and introspective lyrics. Meanwhile Anderson and Barre actually played a double-flute part in Reasons For Waiting, a cut Cat Stevens could have performed. With its variety, and other stand-out cuts such as Fat Man and A New Day Yesterday, and a lack of the concept pieces that filled later albums, this is still the favourite Tull album for many, including Anderson himself.


This has been reissued before in 2010 with bonus cuts, a live disc and surround sound DVD even, but what's happened now is that it's joined the hugely popular current reissue series Tull has done since, featuring a six-inch tall hardcover package, huge liner notes, and the marvelous remastering job done by whiz Steven Wilson. The bonus stuff is very different as well; the live show from the first version was Carnegie Hall, but now we get one from Stockholm, as well as some excellent film from that stuff also on the DVD. There's also a previously-unreleased, and very different version of Bouree. In other words, if you own the first reissue, you pretty much have to keep that, and get the new one. Oh well, the more the merrier, and these boxes have been pretty decently priced, so fans will no doubt be happy with the upgrades. Oh, and it's a pop-up book too! Well, just one of the band, but still, that's fun for the kids.
Posted by Bob Mersereau at 10:34 PM