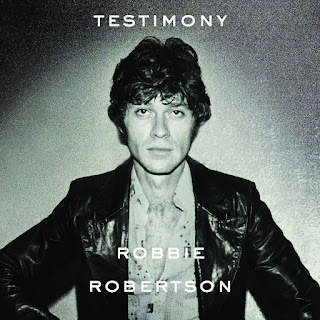 So this is the thing now, a career compilation to go along with a career autobiography. Elvis Costello did it very well, with a huge 2-disc set you could follow along as his career developed. Springsteen didn't do that great, with some not-too-exciting previously-unreleased songs from his pre-fame days, and then a quick career overview. Robertson does a much better job on his, with just the right amount of everything: A bit of pre-Band material from The Hawks days, some Dylan backing, plenty of Band, including a healthy amount of live stuff, and a decent but not overdone selection of his solo stuff. Also, he mixes it up instead of going chronologically, so you don't have the internal argument about which period was better while listening.


There's nothing new, aside from a remix done on a track from his first, self-titled solo album. Since he called the book Testimony, he had Bob Clearmountain spruce up that very track, and as he points out, where else are you going to find a cut that features jazz giant Gil Evans' horn arrangement, all of U2, Daniel Lanois, Ivan Neville, and Nile Rodgers and Bernard Edwards of Chic? Heady times. Of course, Robertson was by that time unphased by famous folks, having started out with rocker Ronnie Hawkins recording his songs while he was still a teen, touring the world with Dylan, and rubbing shoulders with pretty much everybody in pop culture. We hear a cut recorded with Hawkins, Come Love from 1961, while the Hawks were still in transition. Then there are a couple of the great R'n'B tracks after the group left Hawkins' employ, He Don't Love You, and the superb I'm Gonna Play The Honky Tonks (heard before on the Band box A Musical History), maybe the best cut out there proving Garth Hudson's claim that the very best Band music was the stuff they made while it was still Levon and the Hawks.


Robertson takes a side trip to his time as Dylan's lead guitar player on call, showcasing his studio work on the Blonde On Blonde track Obviously Five Believers. Then, it's The Band's turn, and instead of turning it into a greatest hits, he mixes up the live and studio tracks, choosing concert recordings for the best-known, including The Weight and The Night They Drove Old Dixie Down. He grabs some great but often ignored cuts, such as the Cahoots track Bessie Smith, and the studio cut Out Of The Blue from The Last Waltz set, which he sang beautifully, for all those who say he never sang on Band songs. Wrapping up with a little solo work here and there, it's a fine job at telling his career story and keeping it fresh, something that's hard to do given the fame of much of this music.
Posted by Bob Mersereau at 9:09 PM