MUSIC REVIEW OF THE DAY: MONKEYJUNK - TIME TO ROLL 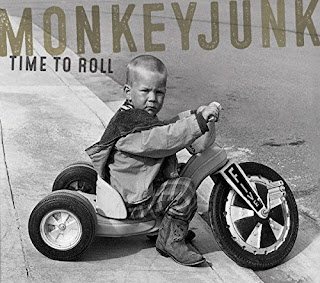 It would be easy to call Monkeyjunk one of Canada's very best blues bands, and while that isn't wrong, it's never quite felt right to me either. Instead, the group seems to be that, plus. Monkeyjunk songs, and albums, always have that moment when you hear something different. Often it happens in the chorus or bridge, when instead of the usual change comes a better chord, that takes what was already a winning song to a new place.


Weary ballad Blue Lights Go Down has one of those smart changes into the chorus, which lifts up the mood. The first time through, Tony D puts on a smart, Santana-like solo, while on the second pass, Steve Mariner plays an Eastern-flavoured harmonica to end it off in a questioning way. Up next is Pray For Rain, which starts with some ringing, sitar-like guitar, before verses that remind me of those great Clapton parts on the Layla album.


Sharp-eared fans will also notice it's the first album (in their five) to include electric bass all the way through. In some ways, it puts them further in the blues roots, allowing them the full sound to explore a cover of Albert King's The Hunter, but it also meant building bigger tracks, giving them more room to explore their ideas, like on the soulful Can't Call You Baby. File them under originality.
Posted by Bob Mersereau at 2:30 PM