MUSIC REVIEW OF THE DAY: THE EVERLY BROTHERS - HARMONIES FROM HEAVEN (DVD) 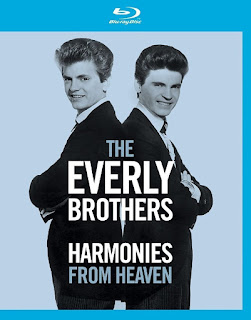 A new bio on the 20th century's favourite harmony act. You can't say pop, or rock and roll, or country, because they got claimed by all the formats, big hits on all the charts. This doc does a great job explaining why, and what made the duo so special, from the brotherly harmonies to Bo Diddley guitar mixed in to the great songs written for them by Felice and Boudleaux Bryant and the ones they came up with as well. There are new interview bits with Don, archive ones from the late Phil, and lots of famous fans as well: Keith Richards, Graham Nash, Art Garfunkel and Dave Edmunds all have strong insights and personal connections and stories, which is a bonus, especially hearing Richards and Nash talk about meeting them in England in the 60s at the start of their careers. Their influence, especially on the Beatles, Hollies and Simon and Garfunkel, was key to all their careers.


Even better are explaining sections from guitar greats and former sidemen to the brothers, Albert Lee and Waddy Wachtel, who give us musician's secrets to the duo's excellence, plus dish a tiny bit of dirt and background tales of the famously feuding siblings. Nicely though, they also talk about the good times, when both would end up in the late-night hotel jams singing old country favourites. Because this was made by the always-excellent Reelin' In The Years company, there's a ton of great clips from early TV shows, and even an aircheck of the boys as part of the family act on radio in 1950.


It flies past, and sadly, it's just an hour long, meaning important moments are skipped over, entire segments of their career missing, and nothing but a mention of their 80s reunion and subsequent tours and albums. To make up for that, there are some bonus extended interviews with several of the stars, including some really good stories, so they are worth a watch. But even better is a second disc, another example of Reelin' digging deep and finding gems. It's a concert from 1968, originally broadcast on Australian TV, from a spot in Sydney called Chequers Nightclub. As explained in the documentary, the mighty had fallen by this time, one of the many American acts in decline after the British Invasion. They were still making great music, as their recent single, Bowling Green, played here shows, but they were by then a club act. A great one mind you, but it really is odd to see Don being a comedian before and sometimes during songs, with Phil as the straight man, sort of like the Smothers Brothers, only with weaker material but a lot better music. To hear the closing encore of the show, the beautiful 1940s number Kentucky, is all the proof you'll ever need they were the very best harmony singers.
Posted by Bob Mersereau at 8:59 PM