MUSIC REVIEW OF THE DAY: THE FABULOUS THUNDERBIRDS - STRONG LIKE THAT 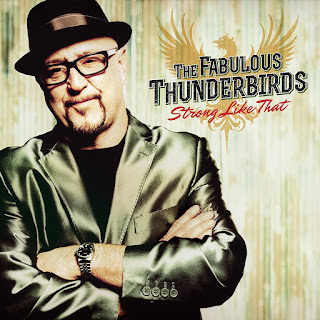 The Thunderbirds are go, finding a funky place between soul and blues, and I'd argue leaning harder towards the soul side. Deep soul too, not the smoother kind, but the pulse of Memphis. You can tell from the covers, as the band goes into the lesser-known areas of the Stax canon, including Johnny Taylor's Somebody's Getting It, Albert King's Drowning On Dry Land, and Eddie Floyd's I've Never Found A Girl. When the group does go Motown, it's the grittiest example, The Temptations (I Know I'm) Losing You.

Kim Wilson's sounding even more like those deep-voiced 60's Stax singers such as William Bell, or even King. A little B.B. in there as well. His always nasty harmonica playing leads the way, there's a good amount of added horns, and the rest is tight, in the pocket playing, focused on the groove. There's not much guitar heroics, this is clearly Wilson's band, and the songs are the key. For that, it has a confident, and professional feel, in the very best sense of that word.
Posted by Bob Mersereau at 3:22 PM