MUSIC REVIEW OF THE DAY: THE BAND - THE LAST WALTZ 40th Anniversary Edition 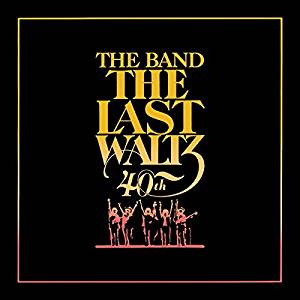 Such a night, as Dr. John sang. The influence of this all-star concert is certainly just as strong today as it was 40 years ago, and I'm always happy to meet another 20-something who knows the film and has a good appreciation of some classic artists because of it. For many, it's been their introduction to Muddy Waters, Van Morrison, and the good Doctor, plus the wonderful Band music. They ask about why Joni Mitchell sang harmonies from backstage for Helpless, and if Neil Young really did have a blob of cocaine in his nose that was doctored out in the film. And they can't figure out why Neil Diamond was there either. There's even this phenomena of tribute shows to the concert, anywhere with a decent local roots music community.


The Last Waltz has been reissued a few times, both on video and audio, most significantly in 2002, when a boxed set made available a raft of performances edited out of the familiar movie and soundtrack album, full songs on stage, as well as some rehearsals and demos for Robbie Roberton's studio tracks for the movie. Some were interesting, such as Neil Young doing Four Strong Winds, some superfluous, like the dull closing jams from the show, and some exciting, such as the full, unedited set by Bob Dylan, with Hazel restored to its place as the second song.


There's nothing else in the bag apparently, so to mark the 40th, they've come up with two marketing strategies. For the first time, you can buy the movie and the music in one package, as four CDs and one Blu-Ray. If you don't have the full set of songs, or the movie, I'd recommend it, as it is a film you'll watch a few times over your time on this planet. The other package, which is the way I got it, is a treat for vinyl collectors. For the first time, all the music now appears on LP, six of them in fact, twice the original length. I found the sound absolutely wonderful on this new pressing, so much so that I went back to find my original 3-LP set, and wouldn't you know, it's disappeared. Anyway, I sure can't remember it being this rich and clear. Man, that Dylan set rocks, too. Pretty great show all around, but really, Neil Diamond?
Posted by Bob Mersereau at 8:46 PM