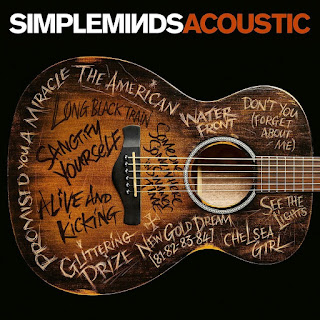 There are two ways to look at this. While it hints at a sense of desperation, trying to sell the old hits in a different way, you can also argue the band are giving fans exactly what they want. Here's the classic set list, the one that still sees fans by the thousands (mostly in far-flung spots in Europe or Australia, etc.) greet them wildly, like 1985 never ended. Acoustic is, as usual, a dubious way to describe what's happening. Let's say they've toned down the synth approach, replaced electric guitar with acoustic, and the booming drum sound is now a lighter, woodier one.


Still, the music is big and grandiose, There's nothing intimate about anthems such as Alive And Kicking and Waterfront. These are songs that all lead to the big, raise your lighter in the air moment (I guess it's cell phones now), and the stripped-down versions still deliver that oomph. Don't You (Forget About Me) still has its slow-burn, big finish format. Promised You A Miracle features a guest vocal from KT Tunstall, another bigger-in-Europe star, and North Americans would probably be pretty shocked to find out just how huge the band still is on their home side of the ocean. They have no problem playing major tours, especially now that they can do one leg in band format, another in acoustic, then switch them around on the next tour. Oh, and the current tour? It's a whole month in Germany, playing with an orchestra. Same songs, different presentation.
Posted by Bob Mersereau at 11:42 AM