CHECK OUT THE BURNING HELL AT SAPPYFEST 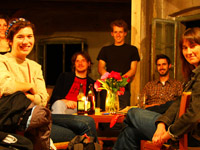 What's the best music festival in Canada?  Hey, there's a can of worms.  Every community thinks theirs is great, and it probably is.  It's all about going or volunteering, making music part of your life, in your city or town.  Now, having said that, certain ones do stand out for a number of reasons, depending on what you like, whether it's the outdoor camping kind, the style of music, the setting, the high quality of the acts, it really is an individual taste question.

I will give a shout-out to a tiny little festival that in a few short years has managed to make a name for itself right across the country, at least in the alternative world.  SappyFest takes place in the small New Brunswick town of Sackville, home of Mount Allison University, and a pretty cool little arts place.  This is the sixth year for Sappy, which starts tomorrow and runs until Sunday.  Now, I haven't been, I must admit, despite living just 2 hours away.  It's a rough weekend for somebody with three kids, that's my only excuse.  Oh, this year my sister is getting married during it, too.  Someday I'll get there.

Sappy was started by the then-backbone of Sackville's music scene:  Canadian indie icon Julie Doiron, photographer Jon Claytor and label boss Paul Henderson, the folks behind Sappy Records.  The idea was simple, to get a few of their music pals from the area and abroad, and have fun.  It turned out that Sackville was a great place to throw up a couple of tents and play cool music.  The vibe has always been very small and very friendly and everybody be cool, and this will be great, and that's what people say it is.  There are some musicians and broadcasters and such that call SappyFest their very favourite music event of the year.  Oh, it's a lovely pretty place too, that helps.

This year's lineup includes The Acorn, Chad Vangaalen, Daniel Romano, Jim Bryson, John K. Samson, Jon Langford, The Sadies, Ladyhawk, Little Scream, Owen Pallett, and many more, including Ms. Doiron of course.  I could write a book about every one of these acts, but just for fun I grabbed the new disc from Newfoundland's, The Burning Hell to see what they're about.  Led by Mathias Kom, the group certainly singular, there's no mistaking them or writing them off as copycats.  First off, the album title Flux Capacitor refers to that gizmo that let Michael J. Fox time-travel in the Back To The Future movies.  Kom refers to a lot of 80's iconic moments, because they were so important to him as a kid.  Yes, there's a ton of humour and irony involved in that, especially a guy basically wrapping about actor John Stamos guest-drumming for the the Kokomo-era Beach Boys.

There's a bit of Klezmer in the sound, lots of basic instruments and lots of emphasis on Kom lead ukulele playing (!) and cool sounds from trombone, violin, clarinet and sax.  But really, we're there to hear Kom's stories, which on the disc center around the theme of returning to his childhood, so that Back To The Future equipment comes into play on a couple of songs.  He has a cool sense of humour, quite a bit philosophical, has a lot to say about death and how shit happens in life, best just to role with it.  I like it when he tells the little kids that sometimes the witches win in the classic fairy tales, and the kids get eaten and that's alright, he came out okay reading them.

Anyway, I'd love to see The Burning Hell sometime, I wish I could see them at SappyFest, but not this year.  You could still go though.
Posted by Bob Mersereau at 8:57 PM