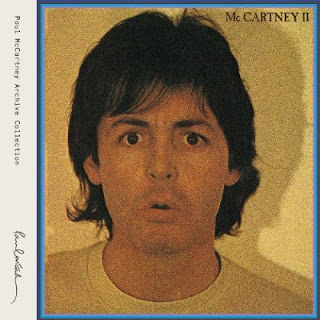 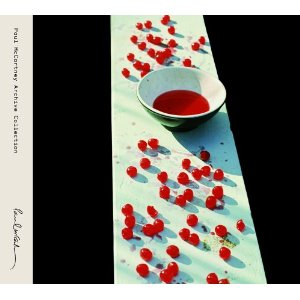 Another series of deluxe reissues, with bonus tracks and special packaging and different variations aimed at every level of fan, from starter to collector.  McCartney has put out his stuff with bonus tracks in the past, but these are significantly upgraded.  The campaign began last year with Band On The Run, the all-time favourite, and now we'll get the rest of the story, dribbled out every few months.

With McCartney, that's going to mean huge swings in quality and interest.  These two prove the point well.  Thematically they are linked, a decade apart.  McCartney was recorded immediately post-Beatles, alone and searching, with no band and everything to prove on his own.  Tired of the studio chaos and increasingly big productions, he used a simple system of recording directly into the tape machine, bypassing consoles and effects, producers and band mates.  While some of these tracks were just for fun and even instrumental snippets, others were leftover Beatles tracks (Junk, Teddy Boy), and some were new works with the Master of Melody still at the top of his powers (Every Night, Maybe I'm Amazed).  Even in this limited recording session, McCartney could still find just the right sound for his bass, drums, keys, and had an immaculate sense of how particular instruments would work together.  Best of all, he had, and still has, an amazing sense of timing as an arranger.  In a classic McCartney song, individual sounds, whether from the instruments or the voices happen at the perfect time.  Whether it's as simple as a cymbal fill or as complex as vocal harmonies in the chorus, they arrive at exactly the point where you go, "wow, what a great idea."  Although often dismissed as slight, McCartney is actually chock-full of gems, even the slightest instrumental holding one of these special moments.

Now McCartney II, there's a piece of crap.  As the nearly decade-long Wings period drew to a close, with the band losing members every couple of years, a frustrated McCartney returned to the system, once again trying to get past the problem of working with others.  This time, he claims it was simply for his own edification, and he was talked into releasing it as a full album.  Whoever did that needed his head examined.  What McCartney was experimenting with was new technology, specifically synths, and what he could do with the bells and burbles.  He had almost no songs, and was just fooling around with bare ideas.  For lyrics, often silliness and repeated phrases were dropped in, with even the vocals put through effects or sped up.  Plus, he wanted to be funky.  Paul, you wrote Yesterday.  It ain't funky.  As much as he wanted to be, it always came out goofy and smug too.  Unfortunately, some disc jockey had the bright idea to play the flip side of Coming Up, which featured a live version of the track.  It's one of McCartney's worst songs, but it was still a time when people wanted his music, and it was a huge hit.  The actual version found here is a robotic disco number, with what sounds like an electric kazoo and Paul and Linda's chirping vocals sped up to near-Chipmunk speed.  The effect of the live version becoming a hit meant that the album as well became something of a sales hit, but I've never met anyone in my life who actually plays this.  I'll never play it again, if I can help it.

The bonuses found on these two sets are of varied quality.  The less-expensive package is the two-CD set.  The much more expensive deluxe versions come with hard-bound booklets and a DVD.  I'd say there's nothing too special on the DVDs that you'll miss if you choose the cheaper option, but the books are nice.  The first McCartney album bonus CD includes some live versions of the tunes from the decade, plus three out-takes, none of which comes close to being a complete or essential number.  There's a good nine minute mini-documentary on the DVD which explains the time and the concept of the album, plus some more live versions, but it's all worthy of only one viewing.

The bonus stuff on McCartney II is of the same quality as the regular songs, that is to say more of the same awful synth experiments.  Originally this album was submitted as a double album, and this is what would have constituted the rest of the songs for that.  Certainly the director's cut of this might have been historically interesting if he had chosen to release it in that format, but only to show us the original plan.  There's nothing here that would have improved the project.  The DVD includes the video for the studio version of Coming Up, which was notable for McCartney playing all the different musicians himself, dressing up as Beatle Paul on bass, the guy from Sparks on keys, etc.  But even including the Making of the Video only makes us sit through it twice.  A 25-minute interview done at the time of release again explains the ideas he had, but who cares when it sucks so bad.  The Christmas hit Wonderful Christmastime is also here, the only time these synth experiments actually resulted in a listenable song.  Buy McCartney 1, ban McCartney II.
Posted by Bob Mersereau at 9:11 PM