MUSIC REVIEW OF THE DAY: THE MIDWAY STATE - PARIS OR INDIA 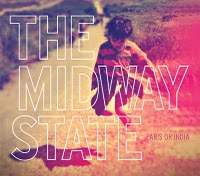 Glossy and poppy, kinda retro and sort of alternative, but really more mainstream, The Midway State is pretty slick.  Drenched in keys and effects, the music is big and important-sounding, worked over into a huge production.  The band spent a year holed up, crafting the followup to their 2008 debut Holes, and hearing the meticulous results I'm starting to understand what takes so long.  This isn't a bunch of guys pounding out tunes on bass, drums, guitars and keys.  Every note sounds like its been put through filters and flanges and valves and whistles.

With everything awash in this sheen, it's like we're stepping back into the synth-80's for 40 minutes.  I couldn't pick it out at first, it wasn't the New Wavers or New Romantics or the other synth bands.  Then it hit me.  With the combination of keys and effects with rock drive and pop accessibility, the album was reminding me of the 80's Moody Blues, with Your Wildest Dreams and The Voice.  That, and singer Nathan Ferraro's high-pitched, yearning vocals.

Now, I'm pretty sure these Midway kids wouldn't have a clue about Moody Blues or much about the 80's at all, I just find it fascinating these big keyboard and effects productions are back in the rock world.  Epic numbers are cool, young bands are allowed to be serious instead of snotty.  I guess its the success of The Arcade Fire, who've managed to take those big, intelligent productions to the Grammy Awards.  It's all a bit too earnest, but you can't knock The Midway State's success rate so far with the MuchMusic crowd.  Maybe it gets a little looser and louder on stage when the fans get to take part.  It just feels so confined.
Posted by Bob Mersereau at 9:07 PM