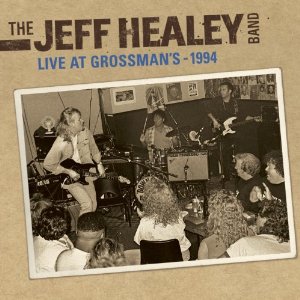 Gosh, there's a lot of Jeff Healey albums around these days, and more promised.  Since he passed in 2008, there have been live albums and final studio recordings, greatest hits, DVD's, reissued old studio albums, some of them jazz and some of them blues. The ones that have arrived from Stony Plain, his last label, were planned productions from Healey.  Others, including this one, are archival projects controlled by others, so you have this flurry of activity.  There are lots of questions and problems when that happens.  How much is too much?  Will the quality diminish?  Will fans get burned by some releases and therefore turned off any or all the rest?  Is everything being done with the right motivation?

This set is the first of what's being called JHB The Live Series, promising future concerts "...as a great deal of previously unreleased content has been unearthed from the band's audio and video archives."  Obviously lots of tape was rolled over the years when the Healey bands played, and for good reason.  I've yet to hear any set that didn't include one or two incredible moments.  Healey could explode at any given moment with something truly amazing, and his concerts were never routine.  He just couldn't help connecting to the music, and when he lost himself in a solo, it could rival the greats.

This night, Grossman's, in 1994, was a bit special, a return to the small haven Toronto blues fans called home, the right kind of grungy place for this music.  The band was getting ready to go into the studio, so it was rehearsal time, getting into game-shape.  That meant favourites and covers, including the usual ones and some surprises only a music historian like Healey could dig out.  No doubt there was a band playing Dust My Broom, Crossroads, and Killing Floor that night in cities all over North America, but probably not as well.  However, it's doubtful there was another group who could also drop The Beatles' Yer Blues into the set, which they were about to record for the Cover To Cover album.

The sound is thickened out that night, as guitar player Pat Rush and harmonica ace Michael Pickett join in, so that's a plus for this set.  Eventually we're going to say enough is enough when we get yet another live version of All Along The Watchtower, but Healey had a huge storehouse of blues knowledge to call on.  We also get Ten Years After's I'm Going Home, Howlin' Wolf's Who's Been Talking, and his mentor Albert King's As The Years Go Passing By, also tracked for Cover To Cover.  I first saw Healey play, guesting at an Albert King gig in Albert's Hall, and I'm still blown away every time.
Posted by Bob Mersereau at 7:43 PM