MUSIC REVIEW OF THE DAY: GILLIAN WELCH - THE HARROW & THE HARVEST 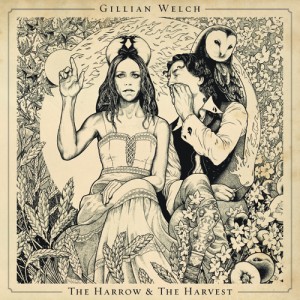 Gillian Welch, where the hell have you been?  After virtually making us all folk fans again with four brilliant albums, it's been bloody eight years since you've released something.  Geez, you even made partner Dave Rawlings actually released his own excellent disc.  Welch admits there was some writer's block involved in the delay, and some problems with early recording attempts.  But still, that's a long time to wait for ten tracks.  This better be worth it.

It takes a while to get back in to the quiet beauty of Welch and Rawlings work.  Nobody makes better two-guitar, two-voices music.  Heck, nobody is that brave to do pretty much only that.  Plus, it's all new songs, they don't fall back on cute reworked covers of pop songs or rediscovered music from decades past.  While there is no song that jumps out like Look At Miss Ohio, the opener from 2003's Soul Journey, it eventually sinks in that you're listening to music timeless, unique and important.

It's back to basics for this disc, with no other musicians, no covers, no looser feel that was offered on Soul Journey.  There are numbers that are truly 19th century attempts, such as Six White Horses, where Rawlings picks up the banjo, and Welch puts on the old-time accent.  That kind of number almost seems like a party trick for them now, we know they can take us back to that century.  I go for the ones that seem old, but have lots of modern touches, words and portions of melodies that make us go from old to modern in seconds, and there are indeed lots of thos moments here.

The song Tennessee is the centerpiece number, a soft and blue number, that could be an old Civil War number, or could be something off Neil Young's first solo album.  Of course, this being our favourite duo, they confound you with surprising chord choices, including one of their most beautiful and haunting choruses ever.  Rawlings sneaks in this tasty little licks as well.  That one will be great to hear live.  Thank goodness they are in the middle of their biggest tour in a decade, stopping by Toronto's Phoenix Concert Hall on Monday, July 25.  The rest of us will have to make due with an upcoming Austin City Limits show this coming season.
Posted by Bob Mersereau at 5:31 PM