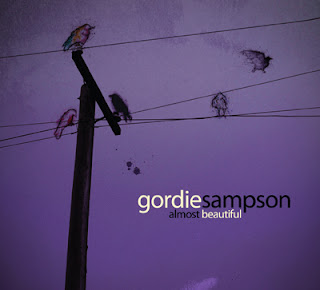 When I listen to a new Gordie Sampson album, I have a hard time deciding whether I'm listening to an artistic statement from him, or the next batch of good songs he's hoping will get covered in Nashville or elsewhere.  Ever since the Cape Breton songwriter relocated to Nashville, the writing has been the precedent, for good reason.  He's a Grammy winner for God's sake, for that Carrie Underwood song.  But with each number here, I find myself wondering which artist would sound best doing a version.

The Other Side Of Letting Go could be handed straight over to Nickelback for their next hit power ballad.  Or, it could go to Keith Urban.  Such is the state of pop music, where the difference between country and rock is whether the singer is wearing a hat or not.  Now, this is supposed to be Sampson's country disc, as opposed to his others in the roots-rock field.  Again, I don't hear much of a difference.  What I do hear is some gems, and some generic work, slick touches that mean he's learned how to appeal to the masses a little too much.

On the positive side, Fear Of Flying is a real heart-tugger, stripped back to basically Sampson, acoustic and an uncredited but excellent female vocalist.  There's a few of these mellow numbers here, Crazy Holdin' On is another sad but pretty duet which could find a country home but has a little Paul Simon in it as well.  Hurricane Jane is a fun uptempo one that's worthy of John Hiatt's pen ("she's a perfect storm").  Sampson's now four albums into a solo career that still holds the potential of making him a big star, but in the meantime you know there's dozens of big-name producers and artists checking out these offerings.
Posted by Bob Mersereau at 11:12 AM