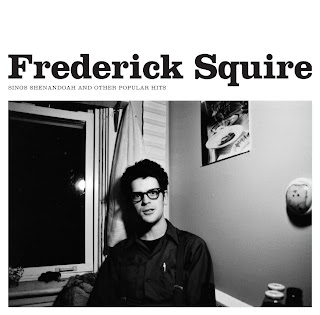 Fred's been a busy boy.  After being a band guy for years (Shotgun and Jaybird, Daniel, Fred and Julie), he's released his second album in a year, following last year's March 12.  That one made it as far as the Polaris Prize long list, proving his aching, ancient style has captured significant interest.  Quickly he follows it up with another home-made haunting one.  It feature Fred with just guitar, voice, and pump organ, mic'ed close.  And while it's indie, it ain't indie rock, nope, this is as quiet as it gets, Squire writing for pre-electricity times.

Shenandoah is the famous folk song, associated with the U.S. Civil War era and the Missouri River.  It gives you an idea of what Squire is after in mood and music, with the other eight tracks being his own compositions.  Aside from a couple of non-typical chords and words, these songs could be more popular hits of that day, but instead are Squire's.  There's a suicide, a burial, a cheating lover, a violent fighter, all the stuff of those times.  Squire finds a neutral voice, that could be old, and could be new, and is quite successful at making the songs timeless.

I quite like the pump organ, which is played subtly, but has a huge effect.  First off, it makes the music feel old immediately.  It also reminds you of old hymns, so that sets the mood.  And, it gives us a different sound than just the acoustic guitar, which gets old fast.  Also, it doesn't feel like a gimmick on the album, as he's not overplaying the thing.  Hats off, Fred.

Squire says the album is about forgiveness, and nobody on the album is judged.  Instead there's a lot of sympathy for these characters, and it's a noble little album, ultimately uplifting in its antique approach.
Posted by Bob Mersereau at 8:11 PM