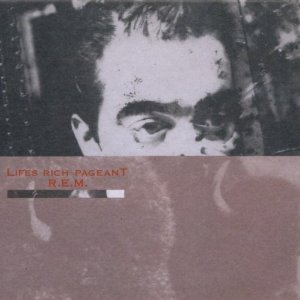 The 1986 album best remembered for everyone suddenly being able to understand what Stipe was singing.  After three albums spent invented mumble-pop, all of a sudden you could pick out actual entire lines.  Now, what they meant, that was another story.  Blame it all on a Top 40 hit-making producer.  The band was ready to progress to a bigger rock sound, and hired Don Gehman, best known for a steady stream of hits with John "Then-Cougar" Mellancamp.  Gehman turned up the vocals, punched up the drums, and helped send them on their journey to the charts.  Pageant was the group's first gold record.

R.E.M. didn't really have to sell out to make the slow move to mass popularity over the next few years.  Now that you could hear more words, you found out there was some pretty interesting writing going down.  Cuyahoga tackles what seems to be environmental concerns, advising "Let's put our heads together/And start a new country up".  The major song on the album, Fall On Me, sees Stipe heeding Chicken Little:  "Buy the sky and sell the sky/and bleed the sky and tell the sky/don't fall on me."  And while that's going on, Mike Mills is singing a whole second melody line of lyrics, in this complicated and superior song, one of the numbers that set alternative music apart from your John Cougar's in the 80's.  Pageant is home to several other important numbers in the early R.E.M. canon, including Begin The Begin, the beautiful Swan Swan H, and the light-hearted I Am Superman, a rare cover on an R.E.M. album proper.

The bonuses here include a complete, 19-track demo CD, featuring most of the songs that made the album, a bunch of instrumental work, and a couple of out-takes.  As with previous demos, we find the group had a distinct sound that stayed pretty much the same through the whole process, so it's not the most revelatory set of songs.  I'd rather hear a live concert from the time.  The deluxe packaging is pretty attractive, with an over-sized box, insert photos and a big poster, so it's a bit arty.  A for the album, B for the bonuses, C for the cash you might want to save by not upgrading if you already have the disc.
Posted by Bob Mersereau at 6:22 PM