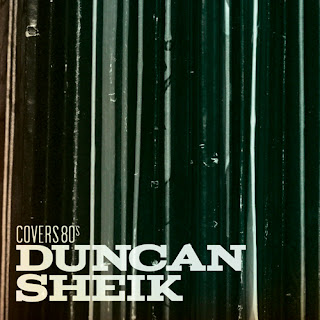 We've had lots of 70's covers albums of late, so of course the 80's aren't far behind.  There's this desperate need for people to attempt to prove the decade was not so bad after all.  I'm not sold on that theory.  Some of my favourite artists made their worst music that decade (Elvis Costello, Dylan), and even worse, wore terrible clothes.  I blame trendy production styles and MTV turning everyone into a model.  If you want more prove, watch Live Aid sometime, and see what holds up. Certainly not The Thompson Twins, and definitely not Bono's boots.

Duncan Sheik goes bravely into the days of synthesizers and bad hairstyles.  While their certainly were good artists making excellent music back then, he's chosen to zero in on the British electro-pop of that time.  So it's Howard Jones, Japan, Psychedelic Furs, The Cure, Tears For Fears, The Smiths, New Order and yes, The Thompson Twins.  Sheik has stripped back these big productions to try to reveal the song underneath.  Instead of layers of keyboards, exploding drums, and waves of vocals, we get Sheik playing almost all the instruments, and helped out mostly by Rachel Yamagata on co-vocals.  Notably this means the synths are gone, replaced by such organic instruments as harmonium, glockenspiel and marimba, plus piano and acoustic guitar doing the main work.

The effect is somewhat unsettling, as these songs are so frozen in time, and in that sound.  To hear the words out of that context throws you off, and familiar melody lines at first confuse you, as you strain to remember what it's supposed to sound like.  As soon as you confirm the song, say the Furs' The Ghost In You, you can enjoy what is a pretty tune without the clutter.  However, there are several that prove to be more style than substance, as befits the whole decade.  Have you ever listened to the lyrics of New Order's Love Vigilantes?  It amazing what a good beat will cover up.  And Shout by Tears For Fears drags without the booming production.  For every song Sheik saves (Hold Me Now, What Is Love), another is unveiled as more machine than music.
Posted by Bob Mersereau at 5:22 PM