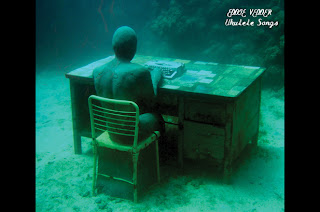 First off, let me say I've never been a Pearl Jam fan.  I don't like that mumbly-grungy thing they do.  This greatly influences my review of this CD.  Oddly enough, my two favourite releases involving Eddie Vedder are this new one, and his previous solo soundtrack for Into The Wild.  That one was simple and folksy too.  I like Vedder and his baritone when there's not much for him to groan over.  Here, with the only a ukulele, it's downright melodic.

For yes, this is one album that is exactly as advertised.  Vedder plays only ukulele here, and not from lack of ability.  He does play guitar in P.J., after all.  Like a few fans, most notably George Harrison, Vedder appreciates the simplicity of the four-stringed uke.  You get basic chords, all pretty and shimmering, making it sweet and simple, rich in the melody.  When you mix that with the sonorous sounds of Vedder's deep pipes, it's a unique effect.  Also, stripping away everything but the chords makes the words so much more important, and there's some good and powerful lyrics here.  I have no idea of Vedder's marital situation these days, nor do I feel like Googling the on-line tabloids, but the song Sleeping By Myself is a pretty strong break-up song.  In the bare-bones state, there's certainly an album full of demos here that could have made a fine Pearl Jam album.  I think it's an even better solo disc.

Also included are a few cover versions, Vedder showing the fun side of the ukulele experiment.  Joining him are Glen "Oscar-winner" Hansard, for harmonies on the old Everly Brothers/Gram and Emmylou weeper Sleepless Nights, and Chan "Cat Power" Marshall on Tonight You Belong To Me.  The latter was done by Steve Martin and Bernadette Peters in The Jerk, so Vedder does have a sense of fun.  He ends with the Mama Cass/Louis Armstrong number Dream A Little Dream Of Me, completing the nice vibes.  It could have been a whole album of such covers, with guest harmony singers, but that would be a novelty.  The new songs make it very strong.
Posted by Bob Mersereau at 9:17 PM