MUSIC REVIEW OF THE DAY: BRANDI CARLILE - THE FIREWATCHER'S DAUGHTER 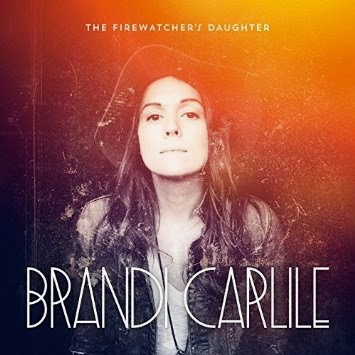 Brandi Carlile is hard to pin down stylistically. There's roots-Americana at the core, but she easily moves back and forth from folk to country to rock to noisy and somewhat experimental. That's more the case than ever on this, her fourth, and most powerful to date. It's an album bursting at the seems, lots of ideas and paths to go down.


There's a reason for this. Carlile is the voice, but this is really a band. When she started ten years back, it was with twin brothers Tim and Phil Hanseroth. They came out of Seattle, with an agreement that they would all write, equally share the publishing (like Lennon-McCartney, U2, etc.) but Carlile would take the front role and all the lead singing. Good plan, as she has an amazing voice, haunting and timeless on The Stranger At My Door, a Western film noir number, rockin' and fun on Alibi, sad and hurt on Heroes And Songs. They are all her, but we don't know which pen or part did what, and that's fine, we don't need to. It's a group effort, that's all.


This road-tested group has been growing stronger, and building a loyal following, plus learning from some good ones. In the past they've had Rick Rubin and T Bone Burnett guiding them, and streamlining the overall package into something more easily identifiable. The diversity found here may mean Carlile and crew have to sacrifice some sales and fame, but it's going to be a more fulfilling ride for them and the fans.
Posted by Bob Mersereau at 8:17 PM