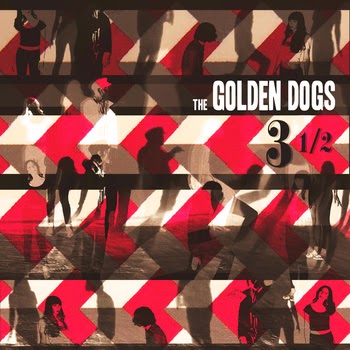 The last few years have been turbulent times for Les chiens d'or. They hit the glass ceiling for indie bands in the 2000's, loved by a core group and their peers (Feist, Zeus) but not breaking out of that circuit. After their third album, 2010's Coat Of Arms, leaders/couple Dave Azzolini and Jessica Grassia found themselves without band mates, and without a clue how to proceed. Dissolution, re-branding, career changes, everything was on the table.


Luckily, the music won out, with the pair working away to rekindle their interest, and in the process redefining the band. Grassia switched from keys to drums, and two new members were added. In this new mini-album of just under a half-hour, the trademark energy is there, The set opens with a funky psych-out, Decided, Do It For You sees Grassia compliment her pounding with distorted power pop. Elsewhere, all sorts of feedback, synths and sound sections get offered up. One cut ends with a Brian Wilson/SMiLE kind of coda, another features a volume assault, and Azzolini and Grassia sing the loudest harmonies going. The Golden Dogs are revitalized, and then some.
Posted by Bob Mersereau at 6:54 PM