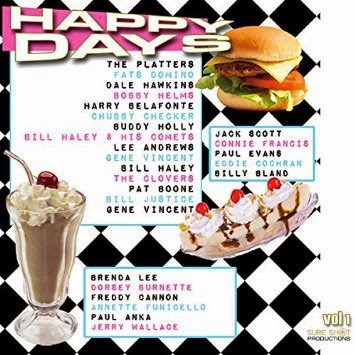 A well-stacked, 30-track compilation of '50's and very early '60's cuts, to match the iconic TV show name associated with that time.  I'd say hits, but some of these border on the obscure, even if they did chart way back then.  It's a funny mix, with such genuine classics as Ain't That A Shame by Fats Domino and The Twist by Chubby Checker sitting alongside Fool, Fool, Fool by The Clovers and Bobby Helms' Tennessee Rock 'N' Roll.  The lesser-known outnumber the major hits, with Be Bop a Lula by Gene Vincent here, but also his rarer Lotta Lovin'.

I like it when the people behind a compilation go to greater lengths than the obvious.  There are lots of great instrumental hits from the era, but you rarely hear 1957's Raunchy by Bill Justice, often cited as the first "twangy" guitar on record.   The typical selection for Freddie Cannon would be Palisades Park or perhaps Tallahassie Lassie, but somebody came up with his version of Irving Berlin's Blue Skies, from Cannon's 1962 album Sings Happy Shades Of Blue.  And it's good.  It's the rare compilation that includes a cut from Windsor, Ontario-born Jack Scott, who had a pile of Top 40 hits in that era, but it's too bad it's one of his sappiest ballads (and biggest numbers), Burning Bridges, there are much better rockabilly cuts from him.  Paul Anka had a couple of dozen 50's hits to pick, so the dreadful My Hometown (#8, 1959) is a miss.

For all the thoughtful work that went into choosing the rare tracks, sometimes there is no distinction made between quality (Billy Bland's Let The Little Girl Dance) and novelty (Pineapple Princess by Annette Funicello).  There's odd repetition too, with four of the songs big hits of Fats Domino (Blueberry Hill, I'm Walkin') and three cuts from Bill Haley, but none of his hits.  I can't figure this one out really, but the good outweighs the bad, the hard-to-find outweigh the repeats in your collection.  If you collect this time period, I'd go for it.
Posted by Bob Mersereau at 11:35 AM