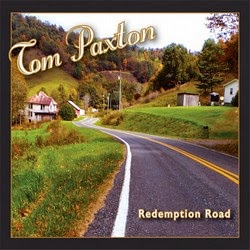 Paxton is one of those guys whose songs have been with you a long time, whether you knew it was him or not. "Bottle of wine, fruit of the vine, when you gonna let me get sober," is a classic, and The Last Thing On My Mind is a folk song standard now. He had a great way with kids' songs: "It went zip when it moved and bop when it stopped and whirr when it stood still," is from The Marvelous Toy. He was writing his own material in Greenwich Village before Dylan came along, and has now released a stunning 62 albums in his career, which includes a Lifetime Achievement Grammy.


That's the history; the impressive current album sees him present thirteen new originals along with a traditional number, with his usual mix of topical, political, personal and fun. John Prine joins to sing a verse of Skeeters'll Gitcha (that would be the fun one). From the heart of the protest era that he helped create comes If The Poor Don't Matter, the answer to which is "then neither do I." Charmingly, he has a tune to celebrate his old pal Dave Van Ronk, hanging out in the Gaslight back in the day, in The Mayor Of Macdougal Street. Van Ronk, one of the best observers of the Great Folk Scare of the late '50's and early '60's, considered Paxton the guy who really got it all going, once he started writing new songs instead of singing the same old ones. He's still got it going, almost 60 years later.
Posted by Bob Mersereau at 6:59 PM