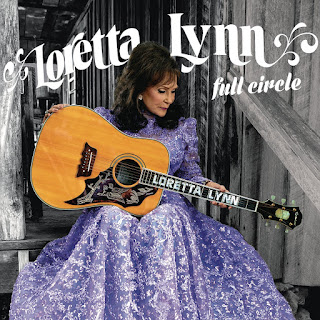 Lynn's last album, the Jack White-produced Van Lear Rose in 2004, was a big hit for her, introducing her to a new generation of rock fans, so you would have thought she would have followed that up right away. But instead, the past decade she's been doing occasional sessions with her daughter Patsy Lynn Russell and Johnny and June's kid, John Carter Cash, producing in the House of Cash cabin studio. Over time, these recordings became a kind of musical autobiography, as Lynn went back to some of her old songs, as well as mountain music that influenced her career. As well, she wrote some new ones, and found more current covers. She's revealed these 13 cuts are part of at least 100 recorded, with the next album's songs already chosen.


Bring it on. Full Circle sees Lynn sounding as great as she ever has, her voice full and inspiring at 83. The kids, Cash and Russell, have recorded in her a spare manner; not the bare minimum of many of the Rick Rubin sessions with Johnny Cash, but rather the sound of acoustic music of earlier country days. The old Carter Family favourite, Black Jack David, is just guitars, bass, mandolin and vocals, and Lynn is clearly in her element. The most produced cuts add a little electric guitar and pedal steel, but still retain the acoustic bed.


Everybody Wants To Go To Heaven ("but nobody wants to die") is a remake of the song she wrote and recorded in 1965, but sounds better than ever now, with piano and a bluegrass-gospel feel. Her update of the classic hit Fist City doesn't have the disarming chipper feel of the controversial original, but still packs a punch (sorry) in the less-produced style.


Lynn's picked out a few favourite cuts as well, including a version of T. Graham Brown's 90's cut Wine Into Water, a great lyric which she makes her own. As she's always done, Lynn sings about important issues in her life, knowing they are something her fans understand as well. In this case, it's about dealing with the effects of alcoholism on a family, and as she's written about before, she saw that first-hand with her late husband, Mooney. Lynn's fans have always known she sings the truth, no matter how much it hurt.


There are a couple of celebrity cameos, one from Willie Nelson, a duet on Lay Me Down, plus a humble turn from Elvis Costello, singing the backing vocals on another new Lynn cut, Everything It Takes. If the rest of the hundred cuts in the can match these, it's going to be a joy.
Posted by Bob Mersereau at 11:19 PM