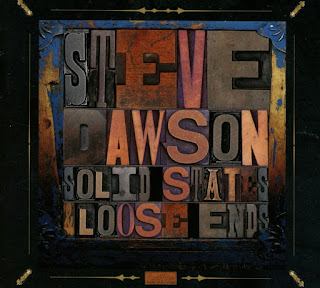 Dawson follows up the widely-acclaimed 2014 album Rattlesnake Cage pretty quickly by switching gears. That last album was all-acoustic and all-instrumental, showing his wild guitar skills. This time out, everything rootsy-bluesy is on the table, the singing is back, so is the band, and they trot out plenty of electric instruments when needed.


Just to show the difference, Dawson starts off the disc with a big soul number, Loose Ends, which sounds like Bill Withers fronting Little Feat. But that's just one trick for the multi-influenced performer/producer. California Saviour sees him back on acoustic, but with some pretty nifty accompaniment, including a ghostly pedal steel, on a track that could have been on those Wilco/Billy Bragg/Woody Guthrie albums. Over 14 cuts, we get about 14 different styles.


The chief weapon here is the killer band, and the fact they can handle all the curves Dawson guides them through. He has the Blackie and the Rodeo Kings rhythm section of John Dymond and Gary Craig on bass and drums, pretty much roots A-list on either side of the border now. On Top Of The World features fiddler Fats Kaplan from Jack White's outfits, who also adds viola, mandolin and accordion when called on. Keyboard man Kevin McKendree was Delbert McClinton's band leader, and shines on several tracks. Plus there are gospel flavours added from backing vocals by the McCrary Sisters, and complimentary harmonies from Keri Latimer.


Dawson's back in soul mode on Final Words, with some stinging electric slide, and some smooth horns. But all you really need to hear to know that Dawson is an awesome player is the old number Riley's Henhouse Door. Picking and sliding his way through the fun barnyard farce, Dawson proves he's a modern master, understanding how the music got from then to now, and that he can handle it all.
Posted by Bob Mersereau at 10:57 PM