MUSIC REVIEW OF THE DAY: STURGILL SIMPSON - A SAILOR'S GUIDE TO EARTH 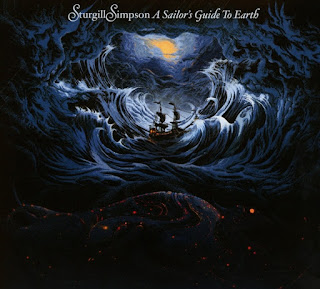 If this is country, I'm Garth Brooks. I figure after all the abuse the genre has taken over the years from the rigid radio formats and cookie-cutter artists, the inevitable reaction was the most talented of Nashville's newcomers would go somewhere wild and far away. Simpson isn't a cowboy, he's a space cowboy. He's got the right twang, and a killer pedal steel player, but everything else is a mirror opposite of what country has been used to.


This whole album journey, for instance, isn't on the prairie, it's on the ocean. There are strings, but not the Nashville sweetening kind, these are atmospheric layers and swaths, like a good alterna-indie artist would add. And horns? Country horns? Not to mention, it's the Dap-Kings soul section.


Of course, everybody knows that the last decade of corporate country has just been old pop music with a hat. Simpson makes the point, and buries it, by covering Nirvana's In Bloom, and doing it as the most country-sounding song on the album. It's already become legendary.


If that's all not enough (and it should be, good lord this album is good), you'll find all these soul-searching lyrics, worthy of the great country writer/philosophers of the '60's, Merle and Loretta and Johnny, only insanely modernized. His sea stories aren't old shanties, these are about modern, poor Americans with nowhere to go but the Armed Forces, "just another enlisted egg in the bowl for Uncle Sam's beater." Seas, as in overseas, Syria, Afghanistan, Iraq and Iran, no end in sight. Once again, you can't get anymore anti-Nashville, he's protesting not just a war, but the whole militarism culture that keeps making the weapons, and creating a market for them.


Hard to say if this is game-changing. This is selling, it's the #1 album on the country charts, but you won't find Simpson on country radio. Really, there's no point beating your head against the wall of mediocrity there; at best Simpson's success will let a few more like-minded writers slip through the cracks. But it's going to be a blast to see how he follows this up.
Posted by Bob Mersereau at 9:58 PM