MUSIC REVIEW OF THE DAY: JEFF BUCKLEY - YOU AND I 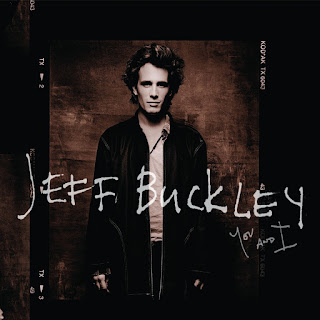 Buckley's mother, Mary Guilbert, has been pretty selective with what she has allowed out of the vaults for posthumous releases, trying hard to keep the integrity of his work intact, while the demand for more has been pretty strong. In the liner notes here, she explains that there is a ton of stuff in the archives, but much of it is of dubious quality, simply the nature of the young artist recording everything for posterity. Since his short career featured only pretty much amazing material, it's tricky to put out anything but that.


This batch of recordings comes from the time just after Buckley had been signed to Columbia Records, when he was the toast of New York, doing solo shows in cafés full of remarkable cover versions as well as a few of his own numbers. That was when he was introduced to the rest of the world with the Live at the Sin-é EP in 1993. To start the recording process, he went into a demo studio and laid down a bunch of his many covers and a couple of originals, just him and the guitar, same way he did his shows.


Famously Live at Sin-é featured a ten-minute cover of Van Morrison's The Way Young Lovers Do, and as future releases showed, Buckley had not only impeccable taste, but a way to reinterpret the great masters that made them his own. Here, he takes on Dylan (Just Like A Woman), Sly and the Family Stone (Everyday People), Zeppelin (Night Flight) and most surprisingly, a couple of Smiths tracks, including The Boy With the Thorn in his Side. Best here was the Led Zep, Buckley showing off his vocal chops, soaring higher, purer than Plant could, while plus cooking on guitar, making it a funky adventure.


There's something missing from these performances compared to the café ones with the live audience. The spark isn't all there, on some cuts he's not going for it as he did when trying to impress the small crowds, such as the Sly Stone number. A version of his own Grace, soon to be the title cut of his debut album, does impress in this stripped-down manner, and the passion in his recording of I Know It's Over by The Smiths is quite something. While Buckley may never have envisioned these seeing the light of day, I think his mother made the right choice, they increase my appreciation as a fan.
Posted by Bob Mersereau at 10:36 PM