MUSIC REVIEW OF THE DAY: ALEX HARVEY - THE LAST OF THE TEENAGE IDOLS 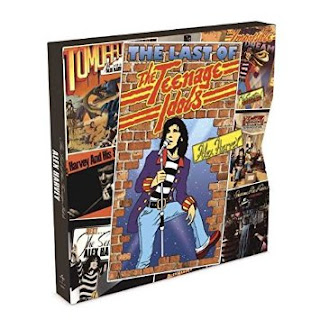 Would you buy a 14-CD, $230 box set from an artist you'd barely heard of?  That's what's being offered here to North Americans, from a guy who barely got out of Europe even in his heyday in the mid-'70's, certainly never had anything near a radio single or Top 40 album over here, and at home was best known for a Tom Jones cover, done tongue-in-cheek.  Of course, that doesn't mean he wasn't good, and maybe great.

Alex Harvey was the leader of The Sensational Alex Harvey Band out of Scotland, a unique mix of glam, proto-punk, hard rock, live theatre and cabaret, working through the 1970's.  I certainly had never heard most of his albums, although available here, and had no idea he'd had quite a long career before then.  Turns out Harvey was a contemporary of all the early British rock and blues acts, met the Beatles while they were still the Silver Beatles, opened for the Stones and was another graduate of the Hamburg school of rock.  But unlike those famous names, the big break didn't come along, at least in those early times.  Like his pal David Bowie, whom he influenced, he had a string of singles and albums that never caught on.  And that's where this massive set begins.

Harvey actually got a recording deal out of his Hamburg residencies, back in 1963, when he was belting out classic early rock, songs such as Framed by Leiber and Stoller, a hit for The Robins and Richie Valens.  Harvey was hardly a conventional singer.  First, he had a rough voice, good for belting but prone to wildness.  Second, he had a great big Glaswegian accent that made some lines undecipherable.  Third, he was as much a showman as singer, putting together all his influences from trad jazz to skiffle to r'n'b to rock 'n' roll to the pub work into a scorching stage presence, helped along by his street-tough upbringing in Glasgow's roughest area.  He was by most accounts one of the very best of his time, but was always the opener, never the star.

There are lots of fine moments during his '60's output, as he tried out various sounds and changed with the times.  A full-on acoustic blues album is included here, just Alex and his younger brother Les, doing classic Lead Belly numbers and the like.  It's a fine showcase of Les's early talents, and he went on to Stone the Crows, an up-and-coming band in the early '70's, but tragically Les was electrocuted on stage.  Alex sounded good in this vein for the most part, but had a tendency to screech off-key at the loudest moments.  Again, it probably went down great live.  There are a full six CD's of 1960's material before he formed his eponymous band.

By the days of flower power, Harvey had still not broken through, and accepted a working wage in theatre, joining the pit band of the new musical, Hair, as the guitar player.  Hardly a starring role, but he loved it and the environment, further increasing his theatrical influences.  Finally, some old bookers from the Scottish scene sought him out, and coaxed him back into the game, believing the mighty singer would work great in the new decade.  After a misstep with one band (including an unknown Mike Oldfield), Harvey was hooked up with some new, much younger Scottish hotshots, and the Sensational Alex Harvey Band was born.

Harvey had been putting away ideas and songs for years, waiting for such a moment, and the right band.  He had some originals, as well as some of his old repertoire, and the first SAHB album was called Framed, after that very same early rock hit he was still covering with passion.  But now, he and the band exploded onto the scene, now Harvey fronting a hard rock band with great players, including a lead guitar guy who appeared in creepy mime makeup. It was a show, along the same lines as Alice Cooper, without the snakes or too many props.  Harvey had kept his working class roots all along, and his songs reflected that at a time when rock stars were getting pretty aloof.  So his fans were coming out to celebrate their culture, one of their own.

Harvey invented a series of characters and stories, in line with his interest in comic books, such as Vambo (eerily similar to Rambo).  Often these story-songs were the highlight of live shows and albums, although never a full concept such as Ziggy or Tommy.  But the albums were never quite up to what the band could do on stage, and that was finally captured in 1975's Live album, which became their most popular.  It was also where the cover of the Tom Jones hit Delilah came from, sort of a soccer crowd singalong version that became the single-biggest moment in Harvey's career.  The group was on the cusp of punk, but had too much talent and showbiz for it, although they were certainly admired by that crowd.

After Delilah, the group did an album of mostly covers, looking for that further connection, and then quickly fizzled out like many others, swept under by changing musical times.  Harvey worked solo for a bit, trying to find a new group worthy of his leadership, but nothing gelled.  He was making a new attempt when he died of a heart attack in 1982, aged 46.

Many of these albums have been out-of-print, or unavailable on CD, and lots of cuts, especially the live material, were unreleased before.  It's not an entirely complete set of Harvey's work, but really there's only some judicious editing to later solo work and the like, and only a taste of the odd Alex Harvey Presents The Loch Ness Monster, where he and family members interviewed residents of the famous Scottish lake about their encounters with the beast, an album done for K-Tel.  The hardcover book is well-done, with a lengthy history and lots of photos, especially some good casual stuff rather than the standard press photos.  So, back to the original question; it's the kind of thing you might pick up hoping to like, and find yourself drawn into the story.  Truthfully, it's a better story than a career, but there was some pretty adventurous stuff going on at the start and middle of SAHB, and you may even join the cult.  You might want to stream a few tunes before the big investment, however.
Posted by Bob Mersereau at 5:24 PM