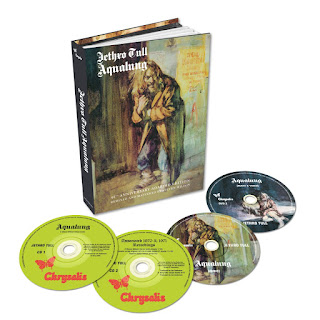 The 40th anniversary edition of an album that came out in 1971. Wait a minute, I'm no math wiz, but I'm counting 45 here. Aha, check the fine print. It's actually the 40th anniversary ABRIDGED edition. See, this came out as a deluxe box back in 2011, with four discs and a vinyl album and cost a ton. Now, it's been repackaged (sans vinyl) in the smaller box used for the rest of the very strong ongoing Tull reissue series, so you can afford to get all the nice bonuses and comprehensive book.


I've written about these reissues before, but to remind you, they are the bees knees, for both Tullists and those with a reasonable interest (me) who wants to explore further. Featuring tremendous sonic upgrades, multiple mixes on two DVD's, and full bonus discs of high-quality material, plus about 10,000 words in various essay, these things are a steal at $36.


Aqualung is arguably Tull's best, although there are many votes for Thick as a Brick, with Benefit having its share of fans too. It has everything Tull did well, from hard rockers to acoustic interludes, big-thinking lyrics and memorable characters. It's also the group's flutiest album, which is good or bad depending on your belief system. I'm certainly okay with it, nobody blows like Ian Anderson, and indeed, nobody really tried, he pretty much had that market covered save for Ron Burgundy.


Anderson has fought long and hard to get the idea that this was a concept record erased from the official record, but it's easy to see why people thought that. It has a lot of songs attacking organized religion, or at least questioning it. There are also character-driven numbers about the unfortunate and ugly in the world (Aqualung, Cross-eyed Mary the schoolgirl prostitute), and it could be argued these once again assailed an unfeeling, or maybe non-existent god. Yet Anderson said they were just a bunch of tunes on one album. His response was to give the people what they wanted the next time, writing an over-the-top concept piece, the 40-minute farce Thick as a Brick.


No matter what you call the album, it works because the songs are so dynamic, including the monster Hymn 43, the delicate Wond'ring Aloud, and the guitar-riff nastiness of the title cut. No wonder it broke the band in North America, and set them up as one of the top selling and touring acts of the 1970's.
Posted by Bob Mersereau at 9:23 PM