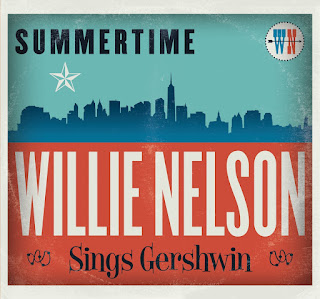 Oh Willie, you old softie.  Maybe all that dope has gone to your head over the years, but you sure are a sentimental one. After all, you did the original retro-crooner album, Stardust, back in '78, way before Buble, Rod and all the smoothies.  Wouldn't you know that craggy voice was just perfect for the classic songbook numbers.  He even did a Gershwin tune back then, Someone To Watch Over Me.

Some 38 years later, everybody and Garfunkel has had their shot at those standards, but Willie still likes them enough to do this full album of George and Ira. He's still the best, too. Phrasing, baby. The very best, from Bing to Bob Dylan, win with phrasing over pitch, every time. These 90-year old artifacts still sound contemporary because of the way Willie sings them, which lets the brilliance of the melody and lyrics come through.


Now, Sinatra, he was a great Gershwin interpreter for sure, as well as Ella and a few other fellas. But for a modern sound, Willie will do, won't he?
Posted by Bob Mersereau at 9:05 PM