MUSIC REVIEW OF THE DAY: VARIOUS - MOTORTOWN REVUE IN PARIS 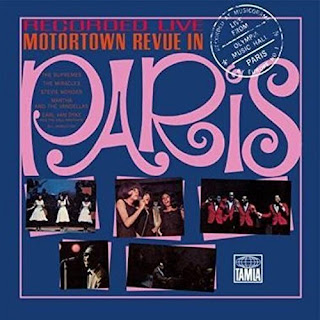 What a show! Four of the biggest Motown acts, in their early prime, backed by some of the great musicians who made the original records, known in the future as the Funk Brothers. In 1965, Martha and The Vandellas, Stevie Wonder, The Supremes and The Miracles had all scored major hits in the U.S., and the Tamla/Motown brand was starting in Europe as well. This prime package tour was put together to build the brand there, with a lengthy U.K. tour first, and then one night in Paris to finish off.


This 2-disc set is an expansion of the original, single album that came out after the tour, but this time we get the whole two-hour show, even the charming M.C. introductions in French. This is indeed a show, with the compere giving away to band leader Earl Van Dyke on organ leading the musicians known this time as The Soul Brothers through a three-song set of hot instrumentals, before bringing on Martha and The Vandellas. Their solid, five-song set included big hits at home such as Heatwave and Dancing In The Street, and the musicians do a strong job replicating the big Motown production on those numbers, helped out mightily by secret weapon Jack Ashford on production.


Little Stevie is up next, still a rowdy teenager and ball of energy onstage, probably the least-known to the audience then, but a barrel of fun. Riffing and jamming with the band, blowing his exceptional licks on chromatic harmonica, he caps off the first half with the hit Fingertips, as upbeat as you can get.


After the intermission, Van Dyke and the band is back for three more set-up songs, before The Supremes take over. They are given a lengthier set, seven songs, clearly the stars in ascendance for Motown. The group is moving into its more sophisticated, adult concert phase at this time, Berry Gordy seeing them as a Vegas-type act in the long run, so the set includes a couple of show tunes, including People. Apparently the choreography was bang-on, we learn from contemporary reviews, so too bad we didn't get to see film as well.


The night ends with headliners The Miracles, Smokey and the gang in full vocal flight, with all the oohs and ahhs in perfect sync. Tuxedo-clad, they do the smooth thing on Ooo Baby Baby, but then loosen the ties for a big finish on Mickey's Monkey.


Not all is perfect here, especially a technical issue with the lead vocal microphone which mars the first few seconds of both The Supremes and The Miracles sets, but that's minor compared to getting the whole document. This now becomes the best representation of a Motown show in the heyday of the label, and a great addition for fans.
Posted by Bob Mersereau at 1:06 PM