MUSIC REVIEW OF THE DAY: ROXANNE POTVIN - FOR DREAMING 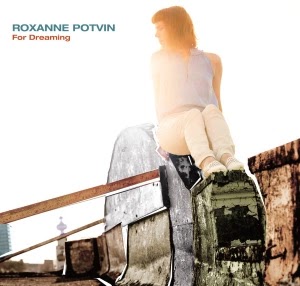 When someone has spent five years between albums, you assume the worst; burned out, uninspired, on drugs, frustrated with the music business, writer's block, huge fights with record label/bandmates/spouse, these are just some of the regular reasons. So it's a rare thing indeed when someone like Potvin spends the five years actually growing, and working on their craft, in preparation for the next release.


No, she wasn't just practicing guitar and polishing lyrics. Potvin worked in a recording studio, and took proper courses in engineering. Wow, education! That's pretty sensible. Of course, when all that was happening, she picked up lots of inspiration for making her own records, and kept her radar on for her next batch of writing.


Potvin has changed and grown dramatically since her first recordings, when she quickly became known as one of the young, bright lights of blues. But with 2011's Play, she ventured into power pop with the help of producer Steve Dawson, with lots of playful moments, funky feel, and a surprise with a cover of Right Said Fred's I'm Too Sexy.


For Dreaming sees an entirely new feel, this time with the exuberance tempered for intimacy. although still in the pop vein. This is an album that could only be made in Montreal, with its instrumental experimentation and quirky outlook. Potvin's new production knowledge brings in lots of interesting sound combinations, lots of beautiful moments, and a warmth from her lead and backing vocals.


Her lyrics are just as dynamic, and singular. Prairie Sunrise is a stunning track, Potvin describing a trip by train that served to open her eyes to how closed she had become, compared to the wide-open vistas. Figuring It Out points a finger at someone who can't get their shit together: "Have you figured out your ex/have you figured out dependence/Have you figured out the times you've been rejected/How long are you gonna spend/Figuring it out."


The intimacy of the recording matches the closeness examined in the lyrics, whether its between a couple, or in solitude, the closeness with your thoughts being alone. The beauty, well, that's the sound of somebody who has learned how to make the sounds in her heart come alive.
Posted by Bob Mersereau at 11:38 PM