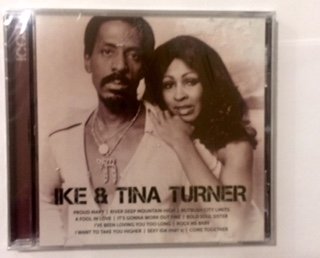 The crimes of Ike Turner were well-documented later in life by Tina Turner, and he went to his grave vilified. It has put people in the awkward position of not feeling good about buying music with his name attached. I guess the best way to deal with this is to consider it's a lot more about Tina than Ike, and as much as people admire her comeback days, the real killer performances come from the '70's and before.


These single Icon sets aren't meant to be definitive, just introductory collections. They stick to the greatest hits, which cuts to the chase, 11 incendiary vocals from Tina (and oh ya, production and ideas from Ike). Proud Mary is the most famous, with unbelievable energy. There are more covers that rival, and in some cases, surpass the originals, including a charged Come Together, and nastier version of Sly Stone's I Want To Take You Higher.


Because the covers provided the most hits, there isn't enough room for their own songwriting to be fully represented, but the duo's first hit, the Ike-penned 1960 cut A Fool In Love shows how even the young Anna Mae Bullock had the goods. Never a prolific writer, Tina did however come up with a true gem in the autobiographical Nutbush City Limits, hometown pride shining through.


But the very best song features just Tina in everything but name only. Ike doesn't appear on the monumental River Deep-Mountain High, except it was still credited to Ike and Tina. Instead, the producer and co-writer was someone even more notorious than Ike, Phil Spector, who had decided Tina was the perfect singer for his wall of sound, and that he had the perfect hit single. Instead, it was a complete stiff in America, reaching only #88, although it was a smash in England. Spector was so devastated, he quit music for two years. Now it's considered a landmark song, and of course, features one of the greatest vocals ever recorded.
Posted by Bob Mersereau at 11:09 PM