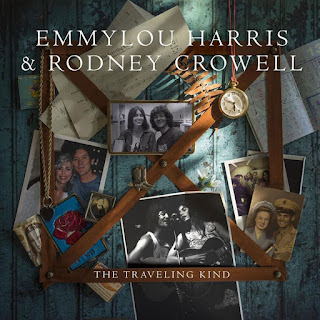 Released back in May, this fine set is now out on vinyl as well. Why don't they put them out at the same time, you ask? I'm sure in most cases companies would like that, but the vinyl boom continues, and there simply aren't enough plants today to keep up with demand. Of course, conspiracy theorists say it's a trick to get you to buy it first on CD or download, and if you really like it, then shell out for the more expensive vinyl. Another theory is that it's a way to get two reviews published of the same album. Me, I think it's all being caused by ancient aliens.


Whatever, I'll repeat what I said in May, this is a surprise and welcome continuation of the Harris/Crowell partnership that spawned a Grammy-winner, Old Yellow Moon. Usually these duet sets are one-off, but it went so well the pair want to keep going. Where Old Yellow Moon was mostly covers of their own and other material, this time the pair set out to write a few new songs. They even teamed up for four of them, something new from their 40-year friendship. The title cut is self-referencing, about the lifestyle the Red Dirt Girl and the Waycross Boy have shared over the years. Of course, the old duet partners are as strong as ever, and a great version of Lucinda Williams' I Just Want To See You So Bad highlights the set.


There's nothing special here on vinyl, no 180-gram pressing, but it still feels like a better way to own this partnership of veterans who started in the vinyl era. It does come with a digital download too. The cover is a bit ugly, it was supposed to be like a memory box but it's a jumble. Part of the reason people loved vinyl and kept it alive was because of the artwork, so hey musicians and companies, it's time to get back into the graphics game, once a big part of the music industry. As has always been known, covers help sell albums. Just some thoughts here folks on the resurgence of vinyl. The music is the real key here, and it's grand. See previous review.
Posted by Bob Mersereau at 1:38 PM