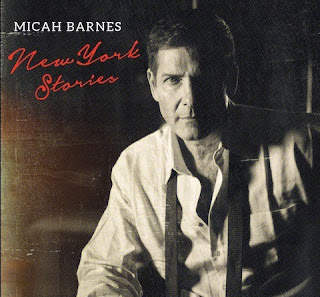 I should probably stop calling people great or fabulous vocalists. Usually what I mean is that they are inspiring and entertaining, perhaps have powerful voices or expressive ones. No, I should save the big words for singers in the same league as Barnes. The jazz-pop smoothie and one-time Nylon has all the technical gifts, as well as the ability to inhabit and breathe soul into whatever he sings. A song becomes better when he's the performer.


You usually find vocalists of this caliber doing versions of the Great American Songbook, and if they are Canadian like Barnes, putting in a Leonard Cohen song out of patriotism. You know, the classics. Instead, Barnes has created his own version of great jazz standards, and if you didn't know better or checked the credits, you'd be forgiven for thinking he was doing some '40's and '50's favourites you simply hadn't heard before. Nope, Barnes was inspired to write this full album while living in New York for a time.


In the middle of a romance, living in Harlem and soaking up Broadway, Times Square and all the great reference points for generations of songwriting heroes, Barnes came up with his own New York Stories. Piano and voice-based, he recorded them with a small jazz combo, as cool as could be. Don't Take My Baby (New York, New York) has that great nightclub swing, a cocksure Tony-Frank number. Some Other Man could be the big ballad in Act Three, when we're unsure if the romance will last or not.


So, Barnes makes me rethink my qualifications for upper-league singers, but I knew that going in to this album. Now he's making me reconsider my thoughts on songwriters as well.
Posted by Bob Mersereau at 9:36 PM