MUSIC REVIEW OF THE DAY: GORDIE TENTREES - LESS IS MORE 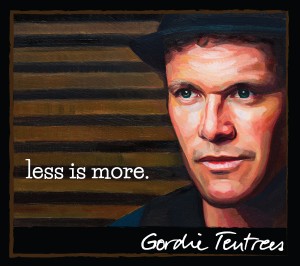 Tentrees sounds like that guy in town who likes to sing any chance he gets, always the first one with a guitar at a kitchen party.  Except when you listen, he's not playing Wagon Wheel, he's playing originals, and really great ones.  The vocals may not be polished, but he's singing the stuff that makes you think and makes you laugh.  The Yukon performer has six albums out now, and has steadily impressed, joining the ranks of top roots writers, while maintaining a relentless touring schedule.

Tentrees likes to keep things rough-hewn, with a relaxed performance, choppy guitar, creepy percussion (his phrase), and loose harmonies.  Even the normally lovely singer Catherine MacLellan plays it casual on her three guest slots, like a front-porch sing-along.  But it's a trick, you see.  All this easy-going music makes the words even more powerful.  On Somebody's Child, Tentrees has written about the conflicting emotions of watching the Boston Marathon bombing, while his wife was running the course.  Fear and anger was there, all his family moments and love flashed before his eyes, but still he had a moment to think of the bigger picture:  "This old world can be cruel and kind/Somebody's child blew up a finish line."

Dead Beat Dad is like a Roger Miller song, fun but with a huge message, about fathers relating to their kids, and simply hanging out with them.  "It's not about you, it's not about me, it's about the little man lost at sea, get over yourself."  Less Is More is an album full of heart, and homespun wisdom as well.
Posted by Bob Mersereau at 11:56 AM