MUSIC REVIEW OF THE DAY: RHETT MILLER - THE TRAVELER 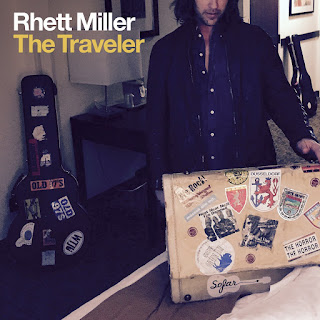 The Old 97's front man has a nice double-career going, now on his sixth solo album, while his long-running band is enjoying it's best results ever.  Last year's Most Messed Up made it to #30, the highest-charting album in the group's 20-year career.  While the band still deals in some downer themes (Wasted, Most Messed Up), on Miller's own The Traveler, things are brighter.  He's celebrating his life here, with the kids ("My little disaster's asleep on the floor"), the love ("Kiss me on the fire escape, tell me that you think I'm swell), and even summer ("We drove a powder blue pick-up truck to the Greyhound stop/you bought a twelve dollar ticket and a two dollar bottle of pop").

The performances match the upbeat tunes, with Miller joined by the largely-acoustic sounds of the group Black Prairie.  Heavyweight pals Peter Buck and Scott McCaughey dropped by later to overdub some solos.  It's all pleasing, and feel-good, with the pay-off at the end.  The last cut, Reasons To Live, lists a bunch of small pleasures, with a buoyant string section and bright piano pushing the song along.  But then Miller drops the chorus:  "Thank God I didn't die when I wanted to/Thank God I didn't die, I wouldn't have meant you."  That's in reference to a youthful suicide attempt that almost, and should have worked.  All these years later, Miller can look back and be very happy how it all worked out.  No wonder the album sounds so optimistic.
Posted by Bob Mersereau at 6:56 PM